A quickest trip to complete the classic Annapurna circuit!

Also known by the name mini Annapurna circuit trek, this trekking package to the top of the Larkya la pass is getting a lot of popularity in recent days because of its short duration. The beautiful icefalls, glacier lakes and the warm hospitality of the locals are also the main highlights of the short Annapurna circuit trek. Trek starting point is Chame village, whereas the trek ending point is the Jomsom of Mustang. Meanwhile, The total trekking days is 6 days including an acclimatization and rest day.

The total walking distance from Manang to Jomsom is about 80 kilometres. During the 6 days of walk, you will cover all the distance. Besides that, during the trek, you will pass through some of the most popular villages and experience the warm hospitality of the locals. You can also witness the marvellous views of the mountain ranges from different parts of the trekking trails.

Annapurna region of Nepal is one of the most popular trekking destinations around the globe. Dhaulagiri, Annapurna, Manaslu and Nilgiri are some of the most popular mountain ranges that can be seen during the Annapurna circuit trek in Nepal. Similarly, it was established in 1985 and with an area of 7,629 square kilometres, it is the largest conservation area of Nepal. Spread in Manang, Mustang, Kasi and Lamjung districts of Nepal, it is also the second most visited area after the Everest region of Nepal and one of the best trekking routes in Nepal.

Muktinath temple is one of the most popular religious sites in Nepal. Similarly, Not only the Hindus but also the Buddhist devotees visit this holy temple that lies at an elevation of 3,800 meters above sea level. Besides that, the Muktinath temple is also the starting point of the Kali Gandaki river, which is considered one of the major rivers of Nepal. It is believed that after bathing at the 108 stone taps before praying at the holy Muktinath temple, all of your wishes can be fulfilled.

Manang is the most popular village on the whole Annapurna circuit trek. Situated at an elevation of 3,519 metres above sea level, Manang is the ideal destination for acclimatization as well as for the rest day. Besides that, during your stay at Manang, you can also take a side visit to the Ice lake, Birendra Tal or the popular Tilicho Lake. Meanwhile, motorable roads reach the Manang village and also the nearest airport is located in Humde village that lies about 2.5 kilometres away from Manang.

Ice lake or also known by the name Kicho tal is one of the highest frozen lakes that lies at an elevation of 4,620 meters above sea level. Besides that, there are two frozen lakes at a short distance of 10 minutes only. From Manang, the trail is zigzag and will take you to the main trail. Meanwhile, the total distance of the trek from Manang to Ice Lake and back is about 17 kilometres. Besides that, it will take about 7-10 hours to complete the hike. Because of that, it is recommended to start early morning hiking from Manang if you are planning a side trip to Ice lake.

You will need to pay a certain amount to the protected area before exploring the site. Annapurna circuit trek completely lies inside the Annapurna Conservation Area of Nepal. Because of that, the trekkers will need to pay for the Annapurna Conservation Area Permit. Besides that, you will also need to pay for the TIMS card. The main purpose of the TIMS card is to get the rough information of the hikers and about the destinations, they are planning to visit. It is to provide them with the necessary facilities or services during times of emergencies or in natural calamities. These two are the Annapurna permits and entry fees you need to get before travelling to the Annapurna circuit trek.

The trail to Thorong La pass from Manang village is one of the most difficult parts of the trek. Meanwhile, during other days of the trek, the trail is an easy walk but you will need to walk more than 15 kilometres on average to complete the trek in time.

Normally, the Autumn and Spring seasons of the year is seen as the best time for a short Annapurna circuit trek. March, April and May are seen as the spring season in Nepal. During these months of the year, you can witness the marvellous views of the mountain ranges and the blowing rhododendron flower in the lower parts of the trekking trails. Besides that, you can also stop by the centuries-old vintage monasteries.

Another best time for the short Annapurna circuit trek is during the months of September, October and November. Due to the clear visibility, you can witness the high mountain ranges from the starting day of the trek. Similarly, it is also the ideal choice as the chances of rainfall as well the snowfall is very low during these months of the year.

Drive to Chame from Kathmandu

At 08:00 AM: We will pick you from your location in Kathmandu. After gathering together, you will take a private ride to reach Chame village. You will take the Prithivi highway to Dumre. After that, you will move towards the Besisahar then take an off-road drive to reach Chame village situated at an elevation of 2,650 meters above sea level. Meanwhile, the total driving hours could be around 9-10 hours.

At 08:00 AM: After breakfast, you will start the trek. Beautiful Lamjung Himal and a long run of mani walls can be seen across the trail. We will see the buckwheat field in Telekhu, beautiful waterfalls at Bhrathang village. After crossing the village we will continue towards the upper Marsyangdi river. You will have an amazing view of the curved rock slab Paungda Danda. The hike to Pisang takes about 5-6 hours.

At 08:00 AM: The villages in between the trails that are rich in cultural and natural aspects are, Ghyaru, Nagawal, Humde and Bhakra (Braga). Braga is home to the largest Gompa (Monastery) in Manang. The trail passes through the pine forest, farmlands, apple fields and villages. Throughout the trail, an excellent view of the Annapurnas, Tilicho Peak, Gangapurna, Pisang Peak and Chulu East can be seen. Overnight at Manang.

At 08:00 AM: Have your breakfast at the hotel and you are free for the day. You can interact with the locals or other hikers travelling to Thorong La pass or Tilicho lake. Besides that, you can also learn the tradition and culture of the locals. Similarly, you can also take a hike to the Ice lake during the day. You will have to wake up early in the morning (before 6 AM) to take a hike up to the Ice lake and back to Manang village.

At 08:00 AM: The trail now heads to the north, we will have the Chulu peaks in front of us and follow the small river stream upwards. The terrain is rough and rugged. You will have already left the tree line area thus most of the trail now will be dry and rocky. There is a high chance of rockfalls and while walking we have to be really careful about it. After 5-6 hours of walk, we will reach Thorong Phedi for your overnight stay.

At 05:00 AM: Today is the most difficult and the most rewarding day of your entire trek. You will be crossing the Thorang La pass at 5,416m. It is the highest point of our short Annapurna circuit trek. You can enjoy the panoramic views while sipping a hot cup of coffee or tea.

There is a small tea shop here at the pass. After spending some time at the pass we will descend down towards the Muktinath. The trail now is all going down and the cold desert looking terrain is in front of us. After Thorang La passes, we will be entering down to the Mustang area. The total walking could take about 9-10 hours.

At 08:00 AM : Today after breakfast you will start your trek to Jomsom. You will pass through the village of Jharkot, Shakya Monastery, a traditional medicine centre, Kagbeni on our way to Jomsom. Amazing views of Nilgiri and Dhaulagiri are seen throughout the trail.

Jomsom is the hub of Mustang distirct with an airport, schools, hotels, banks, shops, museum. From here you will have the flight option to fly back to Pokhara or drive to Pokhara. The total duration of the hike today is about 6 to 8 hours.

Fly to Pokhara, Drive to Kathmandu

At 07:00 AM: Wake up early and have your breakfast. You will take a morning flight to Pokhara. The total duration of the flight from Jomsom to Pokhara is about 15-20 minutes. After reaching Pokhara you will take a private ride back to Kathmandu.

Meanwhile, the total duration of the ride is about 6 to 7 hours. Besides that, you can also take a connecting flight to Kathmandu from Pokhara. Upon arrival at Kathmandu, you can check in your hotel and we will have a farewell Nepali dinner together.

Find all required information about short Annapurna circuit trek, or feel free to contact us for any kind of assistance. 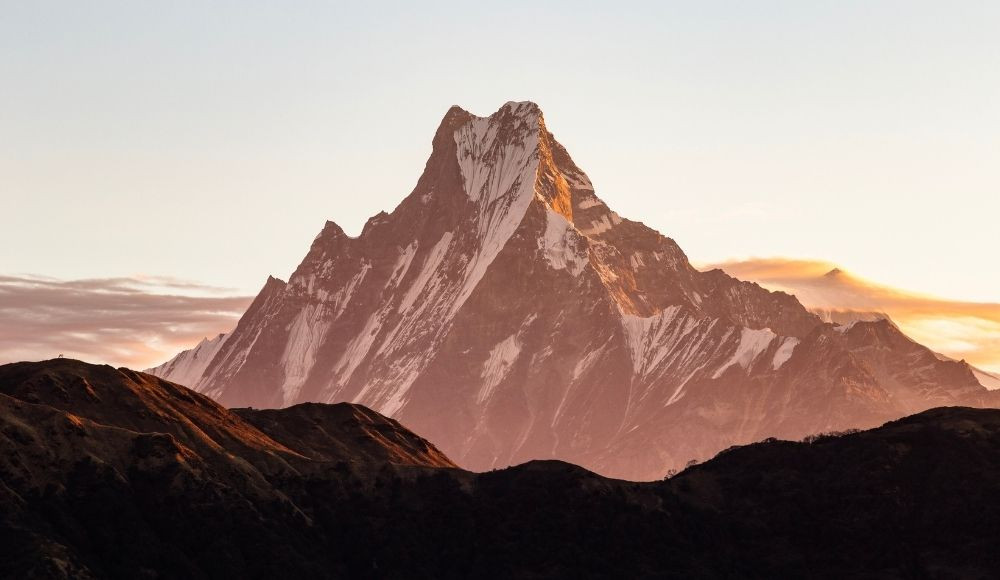 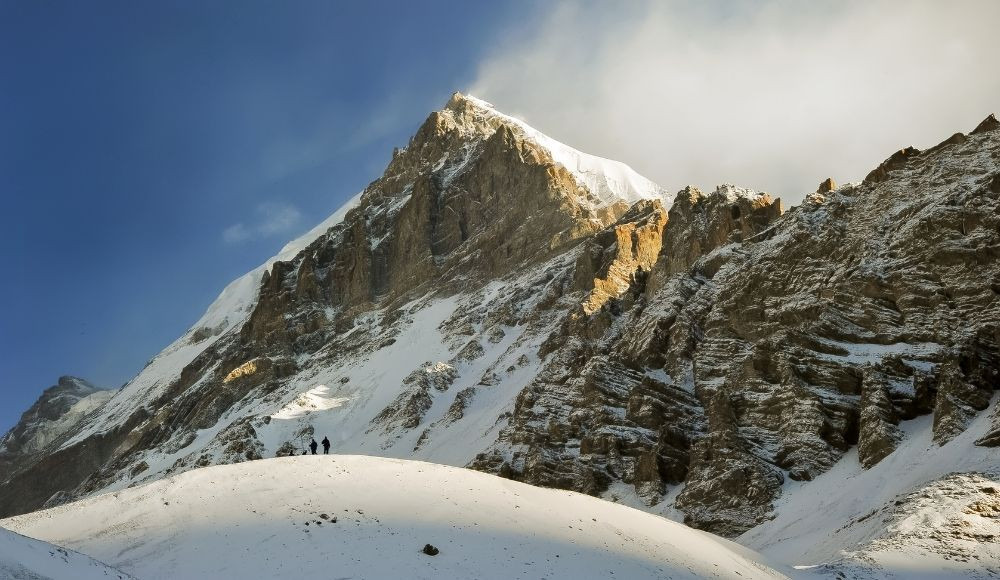 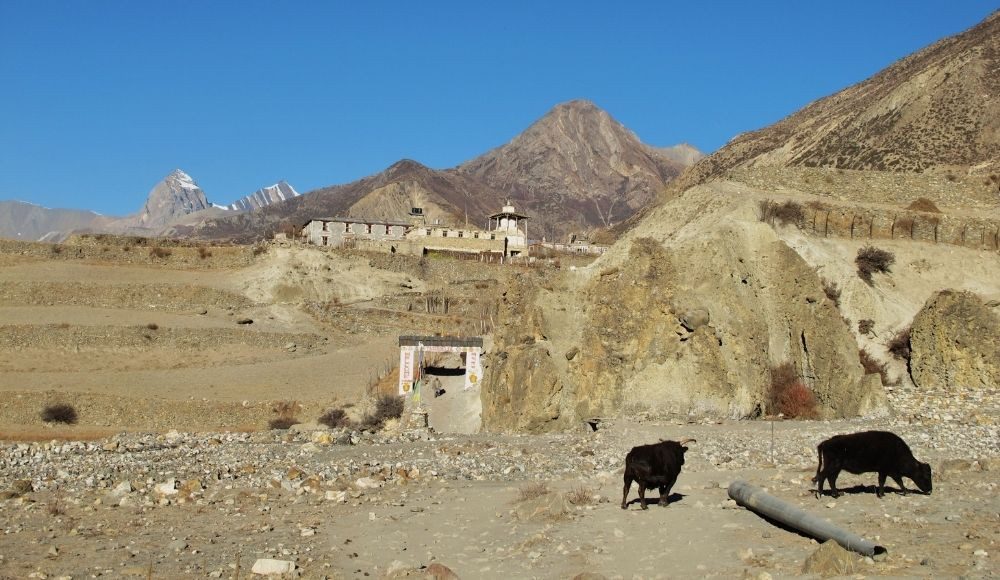 8 Days from
US$ 1050 pp
Request a Quote Book Now
Share With Your Friends: