This wild beauty of the far western region of Nepal is integrated into an undisturbed, least human interfered untamed land. 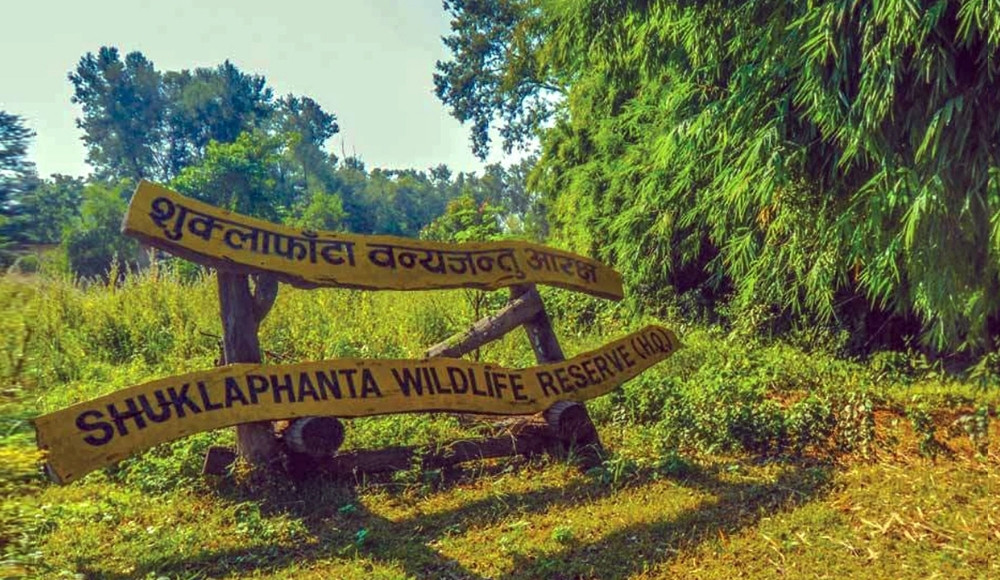 Shuklaphanta National Park is Nepal’s youngest and rarely visited, consequently pristine wildlife gem. This wild beauty of the far western region of Nepal is integrated into an undisturbed, least human interfered untamed land. The park is now home to the largest herd with more than 2000 swamp deers, an estimated 17 feral tigers, and superb wildlife.

Park area itself is unexplored and yet to be a good tourist destination with amazing grasslands, inhibiting the varieties of wildlife including Mammalia, reptilia, aves and amphibian families. The elementary significance of this national park is still into a conundrum being unexplored and filled with immensely beautiful floral and faunal spectrums. Once a kingdom of Tharu king Singpal, the wild beauty is now a pristine national park with mind-blowing landscapes and sceneries.

Shuklaphanta is a far western lowland of Terai in Kanchanpur District. It is the second-largest wildlife reserve in Nepal. The area of this national park is 305 square kilometres. It shares a common boundary with the Indian state of Uttar Pradesh in the South and West which is formed by the Mahakali River, also known as Sharada River and a major tributary of the Ganges river. It boasts a wide range of biodiversity with lots of natural attractions.

Facts and Figures of Shuklaphanta

This area was priorly founded as a hunting ground in Nepal and was also declared a Royal Hunting Reserve in 1969. In 1973, the initial area of Royal SuklaPhanta National Wildlife Reserve, at first comprised 155 square KM and extended to its current size in the late 1980s. The then gazetted wildlife reserve is changed to the current status of a National park in 2017.

The forest of the Suklaphanta National Park was once the site of the Tharu Kingdom. To this day, the ruins of that Kingdom can be seen in some places. Near Rani Tal, a lake in the reserve, the remains such as a brick girdle (belt), measuring 1,500m in circumference is situated. It is also considered as a reminder of the castle of the Tharu king Singpal.

This area through four different seasonal experiences. The spring season is a favourable time with moderate humidity and temperature. The months of March to June lies in this season. Also, the greeneries are just about to begin and lush forests make the mind-blowing excitement. The skies are clear and the environment is beautifully filled with natural beauty. The months of February to April lies in this season. The summer season is generally not favourable to visit this region. The lower part of the terai faces extreme heat and humidity. The daytime is pretty much fierce and morning and evening time are still favourable to roam around. It starts in May and lasts till August.

The monsoon starts in mid-June and ends at the starting of September. The Autumn season is also the favourable season to visit. It falls in the months of September and lasts till November. This is also the festive season of Nepal. The major Hindu festivals such as Dashain, Tihar lies in this season. And the festival celebration in the far western region is celebrated bombastically. November to February is winter in the Shuklaphanta region. The winter in the lowland terai is cold and gloomy. The Winter season is, however, favourable to visit but cold weather makes it a little hard.

The extensive open grasslands and wetlands around the lakes of the park are the habitat for a wide range of flora and fauna. In rivers, lakes, and ponds 28 fish species and 12 reptiles and amphibians species were recorded. The vegetation types primarily include sal forest, sal savanna, part of a continuum between climax forest and grassland, maintained by fire and floods.

It includes 46 mammals, of which 18 are protected under cities such as Bengal tigers, Indian leopards, elephants, etc. It is also home to great one-horned rhinoceros from Chitwan National Park. The antelope species of Blackbucks also inhibits here.

Swamp deer in the grasslands found here, is the largest in the world. In the 2013 census, the count of swamp deer was 2170 in the reserve. In 2016, the rusty-spotted cat was photographed by a camera trap for the first time in the protected area.

A total of 423 birds species has been recorded in Shuklaphanta National Park. However, the forests are important for great slaty woodpeckers and white-naped woodpeckers. The white-rumped vulture, slender-billed vulture, lesser adjutant, grey-headed fish eagle, darter, and rufous rumped grassbird are breeding residents.

Things to do in Suklaphanta National Park

The national park offers a lot of activities. Apart from exploring this pristine Jungle, there are so many beautiful places to visit around National Park. The Tharu culture there itself is a wonderful treat of wild far west land. The temples, lakes, jungles, wildlife, culture and traditions everything of far west Nepal itself is a beautiful retreat.

Wildlife viewing on Elephant Back

You can see different species of wild animals during your elephant back safari in Suklaphanta  National Park. Also, some animals like Tiger, Bear, Forest Deer, Sambar Deer, Indian Porcupines, Red Muntjac, Leopard, Wild Boar and other many more animals can be seen in this jungle excursion.

There are so many places to visit around Shuklaphanta National Park. The Mahakali River is nearby the Suklaphanta grassland. Also, the rani Tal, Ghodaghodi Tal, Dodhara Chandani bridge, Siddhanath temple, Brahmadev temple etc. are the major places to see in this region. The Mahakali river also acts as an administrative border between Nepal and India. The river itself has a huge religious significance. Dodhara Chandani, also known as villages beyond the border of Nepal lies in the fourth dam of the Mahakali river. The bridge there Nepal's longest multi-span suspension bridge.

Rani Tal which is inside the national park. Consequently, there are 24 vertebrate species, 350 types of winged creatures including 180 rearing species, 14 types of fish, 10 types of ectoparasites and gnawing flies occupy the recreation centre. This Tal in the National park has added flavour to the National park.

The reserve is easily accessible by road from any part of Nepal with the completion of the far-western sector of the east-west Highway. Above all, daily flights from Kathmandu to Dhangadhi are available. Also, regular buses from Dhangadhi to  Mahendranagar takes around 3 hours to reach Shuklaphanta National Park.

To get there, the east-west Highway through Kathmandu- Nepalgunj- Shuklaphanta National Park, Mahendranagar is accessible via road as well. Moreover, It is really easy to get into the far western pristine Nepalese land to get an amazing experience with the native hospitality.