Pathibhara Devi temple is one of the most venerated temples in Nepal. This temple is believed to fulfill the wishes of pilgrims. And many people sacrifice animals at this temple to please the goddess Pathibhara. 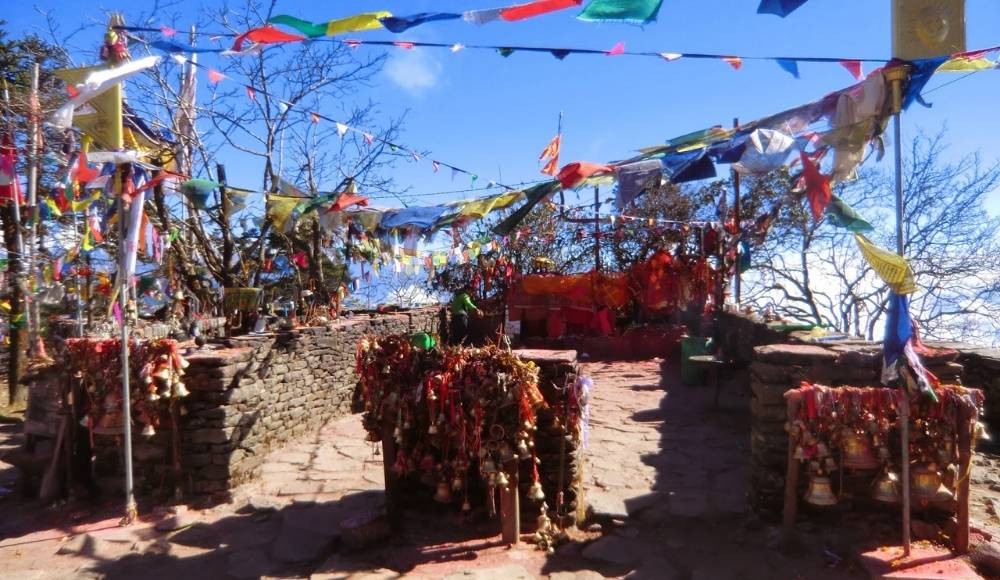 Pathibhara Devi temple, located in the Taplejung district of Nepal, is one of the most important temples of the Hindus. Situated at an altitude of 3,794 meters, Pathibhara is an incredible trekking destination. This temple is believed to be a Shaktipeetha and many people from India and Nepal flock to the temple premises to worship the divine deity.

The temple is named Pathibhara as the shape of the temple is like Pathi. Pathi means a grain container. It is sacred to Limbus as it is believed to be the place of power and purity. The temple is situated in difficult terrain, thus arduous to brave during the time of snowfall and rain.

Pathibhara Devi temple is one of the most venerated temples in Nepal. This temple is believed to fulfill the wishes of pilgrims. And many people sacrifice animals at this temple to please the goddess Pathibhara.

Where is the Pathibhara Temple?

Similarly, it will take about 6 hours to reach from ilam and the distance from Illam to Taplejung is about 163 km. It takes about 2 hours to reach the starting point Kafle Pati.

Besides the religious aspect, many trekkers also travel through Pathibhara Devi Temple to have an awesome view of the Jannu Himal and Kanchanjunga mountain ranges.

More than 30,000 devotees visit the temple every year. Pathibhara Temple is also a side route to the Kanchenjunga Base Camp Trek.

It is believed that Goddess Pathibhara fulfils all the wishes of her devotees by her supernatural power. Because of that many devotees visit Pathibhara Devi Temple on different occasions. Devotees offer animal sacrifice, gold and silvers to goddess Pathibhara with a hope that the goddess fulfill their desire and wishes and liberate them from sins and wrong deeds. .

Walking is the only option to reach the top of the hill from Sanophedi. After passing numerous beautiful villages and about 4 hours of uphill walk you can reach Pathibhara Temple. Upon reaching the top you can witness the amazing mountain ranges. Similarly, a series of bells are there to welcome the devotees.

The statues of Ganesh and Shiva welcome devotees at the second gate of the temple. Inside the premises of the temple, there are some of the rest homes. Many visitors stay overnight during their visit to Pathibhara Devi Temple. The accommodation facility is very basic and has to make themselves comfortable during their stay.

According to the legends, the temple was built after the goddess ordered the shepherd to offer the ritualistic sacrifice in his dreams. But before that shepherd had already lost his numerous sheep while grazing in the same place where the temple is built. But something unbelievable happened as all the lost sheep of the shepherd returned back to the same place after the offering was made to Goddess Pathibhara.

Pathibhara Temple is believed to be one of the Shakti Peethas where the part of Goddess Sati has fallen while Shiva was carrying her body around the earth in the madness of grievance of her loss. Many people from the Limbu community and Hindus visit this temple and it is believed to fulfil the wishes of visitors.

How to reach Pathibhara Temple from Taplejung/Phungling Bazaar?

Only the basic accommodation and food facilities are available from Kafle Pati to Pathibhara Devi Temple. The devotees also can get refreshment from several villages such as Deurali, Ramitedanda, Chhatedhunga, Bhalugaunda, Phedi etc during the walk before reaching the top of the hill.

How to Reach Pathibhara Devi Temple from Kathmandu?

Pathibhara Devi Temple is located in province no 1 in the Taplejung district of Nepal. By flight, it will take about 30 minutes to reach Suketar airport from Tribhuvan airport of Kathmandu.

You can start the walk from Suketar or can drive to Kafle Pati and start to walk towards the hilltop. But the flights to Suketar are on a weekly basis and you will need to wait for the flight date.

But it will take about 10 hours to reach Taplejung which is about 250 km away from Bhadrapur. Similarly, you need to catch a local bus which departs in the morning. Another option is to book a private vehicle to reach Taplejung.

It takes 2 days to reach Kafle Pati if you are travelling by road. It takes relatively more time to reach the road. But the beautiful places that you pass through during the drive makes the journey awe inspiring. Birtamode is an ideal option to stay overnight while travelling by road.

Pathibhara Temple is an incredible pilgrimage in the eastern part of Nepal. Visiting this place is believed to be fruitful as a popular belief is that the people visiting the temple get their wish fulfilled by the goddess Pathibhara.

The Pathibhara Tour from Kathmandu is a wonderful way to reach there and offer astounding views of the Himalayas and lush greenery. Also, a scenic drive from Kathmandu to Taplejung is another major attraction of the tour. The beautiful rivers, scenery,  and mountain settlement in the eastern part of Nepal are the major things to experience on the tour.

It is also believed that visiting the Pathibhara temple cures infertility and the infected couple get a child after wishing at the temple.

The Pathibhara tour starts in Kathmandu. A scenic drive from Kathmandu will take you to Birtamod. Another drive from Birtamod will take you to Taplejung and Phedi. After reaching Phedi, you will travel to Kaflepati and visit Pathibhara Devi Temple. After worshipping at the temple, you will return to Suketar. A flight can be taken to reach Kathmandu. However, a drive can also be arranged for your returning journey from Taplejung.

Pathibhara Trek is popular by the name Limbu cultural Trek. It will take about a week to complete this trek. During the trek, the trekkers can witness beautiful Phuruga, Lim Khim, Khewang, Tellok, PhawaKhola and Mamankhe villages of Taplejung district. Similarly, the trek also offers to explore the vintage monasteries of Oranchung Gola and Lung Chung village of Nepal.

The best time to visit Pathibhara Trek is during autumn and spring. During these two seasons of the year, an amazing view of the Sawa waterfall can be seen. Similarly, the trekkers can also witness the beautiful pond at Timbung village.

During the trek, you can also witness the various wild animals, butterflies, birds as well as the wild plants and flowers blooming around the trekking trails. Pathibhara Trek is also an ideal trek to witness the Kanchanjunga mountain ranges.

A journey to Pathibhara temple is an incredible experience that takes you to the highly revered abode of Bhagawati. There are several other attractions to explore. Trekking around this wonderful place allows you to witness the mindblowing Himalayan vistas and lush greenery.