Makar Sankranti, also known as Maghi, is a festival celebrated by most of the Hindu based ethnic communities. Maghe Sankranti is dedicated to the god of light- the sun. 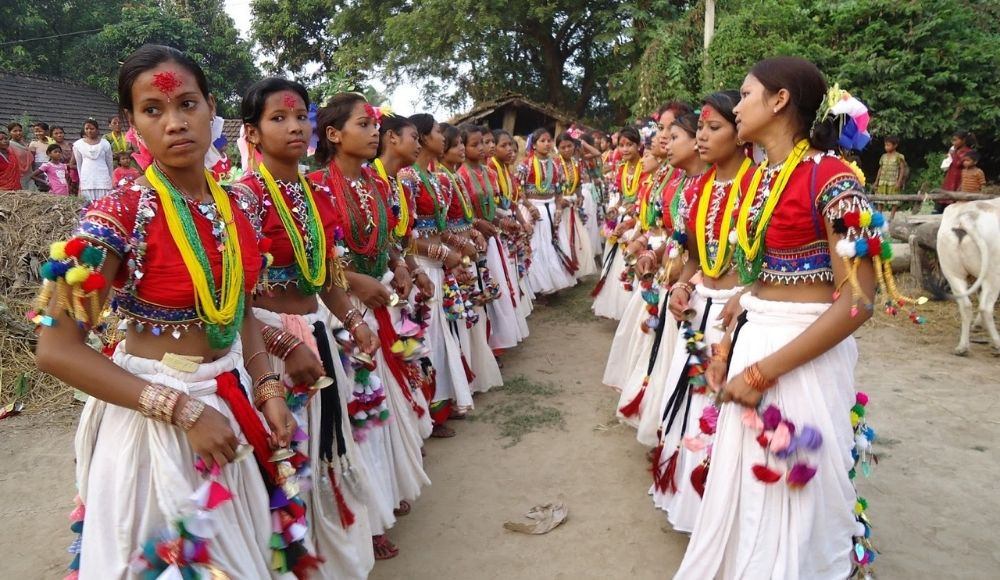 It falls in the month of January, Nepali month- Magh, Marking the end of winter month and the winter solstice. This festival is believed to bring longer days onwards. The festival is celebrated as the first day of the sun’s transit into Makara (Capricorn).

During this day, the nephew and niece visit their maternal home and in the whole month of Magh, married women visit their parental home.

How is Maghe Sankranti Celebrated?

The Maghi or Maghe Sankranti is one of the major festivals of most of the ethnic communities of Nepal and is celebrated with lights and decorations, singing and dancing, kite flying, bonfire and feasts. Many devotees go to the sacred river and take a holy bath believing that all the sin goes away and the liberation.

The celebration of Makar Sankranti is also in the Holy Hindu epic Mahabharata. Thus, it holds a huge significance. Every twelve years, a huge mass observes the festival in the Prayaga confluence. The Prayaga is the confluence of River Ganga and River Yamuna in India.

Most of the Hindu devotees, estimated 40 to 100 million people, observe this festival in the holiest settlement of India in the confluence of Ganga and Yamuna.

In the AD calendar, the Maghe Sankranti festival or Maghi falls on the day of January 14 (varies according to the solar cycle). Festival is mainly dedicated to the lord of light Surya and the huge significance of Surya is traceable to the Veda, especially the Gayatri Mahamantra.

Nepalese people celebrate the Maghe Sankranti by bathing in the confluence of rivers and taking a holy dip to the Bagmati, Devghat, Kaligandaki, Koshi, and Triveni. The sweet potatoes, ladoo, ghee etc. distributed among relatives and daughters are believed to bring good fortune to the family.

The story of Maghe Sankranti traces its roots in the holy Hindu epic Mahabharata. Bhishma Pitamah, son of river Ganga and King Santanu, had control over his death. He has the superpower of getting Iccha Mrityu, the power to kill himself whenever he wants. This is believed to be the day when Bhisma Pitamah discovered the tales of life and death while lying in the bed of arrows hit by Arjuna.

A popular belief is that the people dying on the day of Maghe Sankranti go to heaven and obtain salvation from the cycle of birth and rebirth.

Also, a popular legend behind the Maghe Sankranti celebration is that the Sankranti killed the devil Sankarasur. So, the next day of Makar Sankranti is known as Karidin or Kinkrant. That’s why it is also celebrated as a victory over evil and people make promises to each other on this day.

Another legend states that a merchant of Bhadgaon, present-day Bhaktapur in Kathmandu valley, had a good sale of Sesame seeds. He did very good business and his stock of the sesame never ran out.

Wondering about the stock, he searched for the mystery and found a small idol of Lord Vishnu beneath the pile of seeds. Since that day, the idol is worshipped as Til Mahadev Idol. The popular belief is that worshipping the idol brings wealth, prosperity and a good supply of food.

Most of the Indian people come to some places of Nepal to take a holy dip in the major rivers. Generally, the Swasthani Purnima, a festival celebrated according to the Lunar Calendar, is also observed at this time. Since the Swasthani Brata Katha is a month-long celebration, the Maghe Sankranti falls somewhere in between. Many people go to Sali Nadi in Sankhu of Kathmandu to take a holy dip before sunrise and worship the sun.

Maghe Sankranti also embarks on the beginning of the New Year of Tharu communities in Nepal. This festival is a post-celebration of the long harvesting season. And it is also a major event to share love and happiness among relatives and family.

The family plans for the entire year are made on this particular day. Tharus organizes a feast and celebrates the festival with a huge significance. This transition of the Hindu Zodiac sign from the Sun to Makara is highly revered all over Nepal.

The celebration accompanied by the traditional dances and folklore is an interesting part of the Tharu community. They gather in the major home and celebrate it with their relatives.

This festival is also an auspicious day in which many Hindu rituals blend. This day is Apakshya, and rituals are free to celebrate without searching for a better Muhurta. Muhurta is a day denoted looking after the position of stars. If anybody from a Tharu community wants to be separate and willing to live in a nuclear family, the dissemination of parental properties is also made on the day of Maghe Sankranti.

The delicacies in Maghe Sankranti Festival

In Hindu celebration, Makar Sankranti is regarded as the major festival. The generosity of giving away some utensils and food items to Brahmin and daughters is believed to bring good fortune. In Hindu culture, daughters are regarded as equivalent to the Brahmin, especially in the Brahmin community.

The consumption of food items such as sweet potato, sesame seed candy, Chaku, another Nepali sweet, yam and ghee etc. is believed to make one healthier. The festival is celebrated by wishing a healthy and prosperous life with some enchantments and religious recitations.

On this special day, devotees wake up early in the morning during dawn time. They go to the confluence of rivers and take a dip while observing the Sunrise. The devotional songs and religious recitations take place in the temples and major rivers such as Devghat, Bagmati, Narayani, Trishuli, Kaligandaki etc.

The bulls are prepared and trained by locals and allowed to fight in a plain land in Chandani in Taruka village as part of the annual celebration of Maghe Sankranti.

The event ends once the bull is exhausted and tired and the best performing bull’s owner is awarded a cash prize and certificates.

Bullfighting in Taruka is believed to have been introduced by Bajhangi King Jaya Prithvi Bahadur Singh for entertainment purposes. This is more than a century-long tradition that has been organized in different places of Nuwakot and Dhading.

Maghe Sankranti is also celebrated as a mark of the winter solstice. It is believed that the festival ends the Dakshinayana and begins the Uttarayana. Dakshinayana is the period when the sun travels in the southern direction on the abstract celestial sphere.

The Uttarayana is the northward movement of the sun in the celestial sphere. The sun in Uttarayan embarks on its journey towards the northern tropic, also known as the Tropic of Cancer. This usually happens in mid-January.

Winter solstice is a hibernal solstice when the earth’s poles have their maximum tilt away from the position of the Sun. This occurs two times a year and changes every six months.

In each hemisphere, the northern and southern, this happens once a year and completes the cycle. The winter solstice in the month of January welcomes the longer days and gradually the nights become shorter.

Maghe Sankranti is also the period of transmigration of the sun from one zodiac to another according to the Lunar calendar.