The festival of color and togetherness!

Holi is not just a festival of colour in Nepal. Holi festival means the end of the cold winter nights in Nepal and the arrival of the beautiful spring season where there is greenery all over the nation. 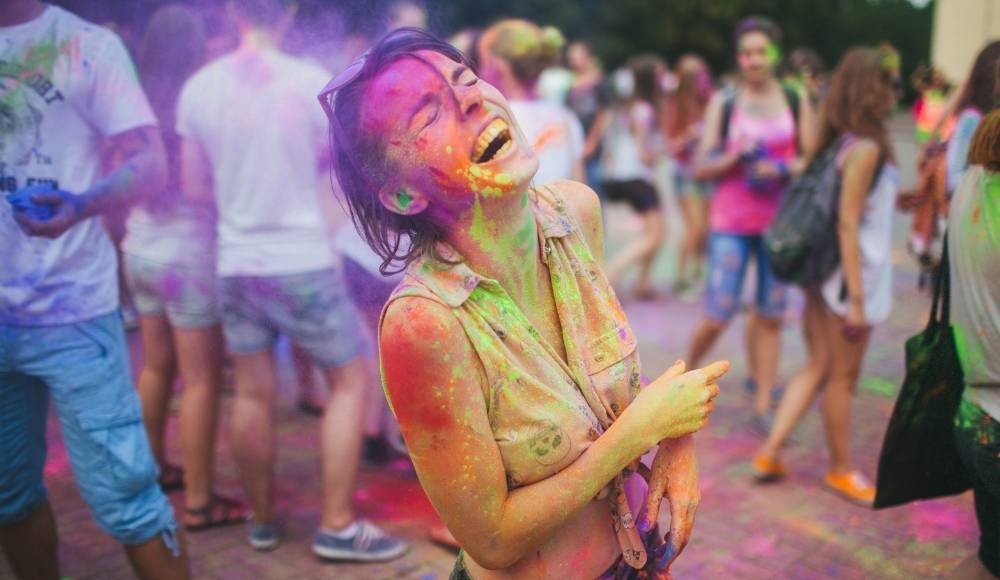 Holi is not just a festival of colour in Nepal. Holi festival means the end of the cold winter nights in Nepal and the arrival of the beautiful spring season where there is greenery all over the nation. It is also known by the name “Festival of Colours”, “Festival of Spring”, “Fagu Purnima” or the “Festival of Love”. The full moon of late February or the March (Falgun in Nepali calendar) months is the day of Holi every year. Exchanging the colours and spraying colour water on one another is the way of playing Holi.

Holi was celebrated in Nepal and India mostly in the past decades. In recent years it is celebrated in many south Asian countries. It is one of the national festivals of Nepal. The public holiday is given over the nation to celebrate this festival with great joy. It is not just a festival of colours in Nepal, it is also a festival to meet relatives, family, friends and loved ones. Similarly, it is a festival to play, laugh, forget and forgive and also to repair broken relationships. As of 2021 the date of the Holi festival is March 28 and 29 and Chaitra 15 and 16 on the Nepali calendar.

Holi is one of the unique festivals of the Hindu. The celebration is the same but the rituals to celebrate Holi are different in Nepal and India. In Nepal, the Holi festival is celebrated for two days. The peoples living in the Himalayan and Hilly region celebrate the first day. Whereas, people living in the Terai part celebrate the next day. Last year Google revealed Google Doodle in honour of the Holi festival and to support this festival.

During the Holi festival in Kathmandu, you can see the different colours spread all over the roads. Not only in Kathmandu but you can enjoy this festival all over Nepal where all the age group, cast and different religions of people celebrate with great joy. Also marked for the spring, spring is the harvesting season in Nepal.

How is the Holi Festival Celebrated in Nepal?

Holi festival is celebrated with great joy in Nepal and India especially. During the festival, people exchange colours and splash colourful water at one another. Throughout the day different colours like red, green, yellow and blue are used to splash their family, friends, relatives and loved ones.

During this day most of the Nepalese wear a white t-shirt where Happy Holi is printed on it. The white t-shirt or clothes are used so that the colour of the clothes are seen clearly. Various colours are used in Holi so that they get a chance to live a year full of happiness and colourful things. Some of the people also keep the clothes used in holy without washing in order to keep the joy and the memory alive.

On the day of the Holi and the day after the blacktopped roads are seen in different colours spread during the Holi festival. Children also used Pichkari to fill up the colourful water and splash them on other people. Water balloons filled with colour water is one of the important things during Holi. All the shops and offices are closed during this time. The environment is filled with different colours. Meanwhile, Bhang which is a special kind of drink is also consumed by the peoples living in the Terai part of Nepal.

Different colours of Holi powders and colourful water are splashed on the peoples. It does not matter if both of you know each other or not it is okay to splash the colours and water on each other during Holi. During this day you can witness many foreigners enjoying this beautiful festival of colour with Nepalese. You can see everyone’s face filled with festive joy and various colours.

The most popular story of the Holi festival is about the victory of good over evil. The story includes the Hindu God Vishnu as well as his devotee Prahlada. In chapter 7 of the holy book of Hindu “Bhagavata Purana,” there is a story of a king named Hiranyakashipu. It is said that he was the king of the Asura “Demons” and had some special boon given by the god. Because of the boon, neither a human being nor an animal could kill him. Similarly, he was immortal inside and outside any house. Neither at day time nor at night time, neither by any projectile weapons nor by any kinds of handheld weapons. And the last nobody could kill him on land, water or air.

Seeing such devotion towards Vishnu makes Hiranyakashipu even more furious. Which made him call his sister Holika to trick Prahlada to sit with her in a burning fire. Holika was an expert at tricking people and sits on the fire wearing a cloak which makes her immune from fire. Meanwhile, Prahalada was sitting without any protection. After both of them sat inside a fire was born. But in the end, the fire burned Holika whereas Praladha was alive without any burn-in his whole body.

After seeing such activity Lord Vishnu appears in front of all of him in the form of Narasimha (half human and half lion). He was aware of the boon of the Hiranyakashipu. Because of that he chooses at dusk to take Hiranyakashipu at the doorstep and place him on his lap. After that, he used his lion claws to kill him. After that, it is believed that the Holi festival originated.

Rules for Holi Celebration in Nepal

There are certain rules which were issued by the government of Nepal and the Nepal Police. These rules and regulations are made so that this festival of colours can be enjoyed by all the peoples without any harm. All of these rules should be kept in mind and should be followed. If not then necessary actions may be taken by the Nepal Police.

There are some etiquettes that you need to follow while celebrating Holi in Nepal.

Some of the basic rules of the Holi are not to drink and drive. No more than 2 people on a two-wheeler. Always use a helmet while riding a motorcycle or any kind of two-wheeler. No to ride or drive above the speed limit in the name of Holi. Not to disturb others by unnecessary cheering. Not to ride by making a large group like. Not to spread colours without another person’s will. Roads should not be used as a place of celebrating Holi. Always follow the traffic rules.