Gai Jatra honours the life and reminisces the deceased. 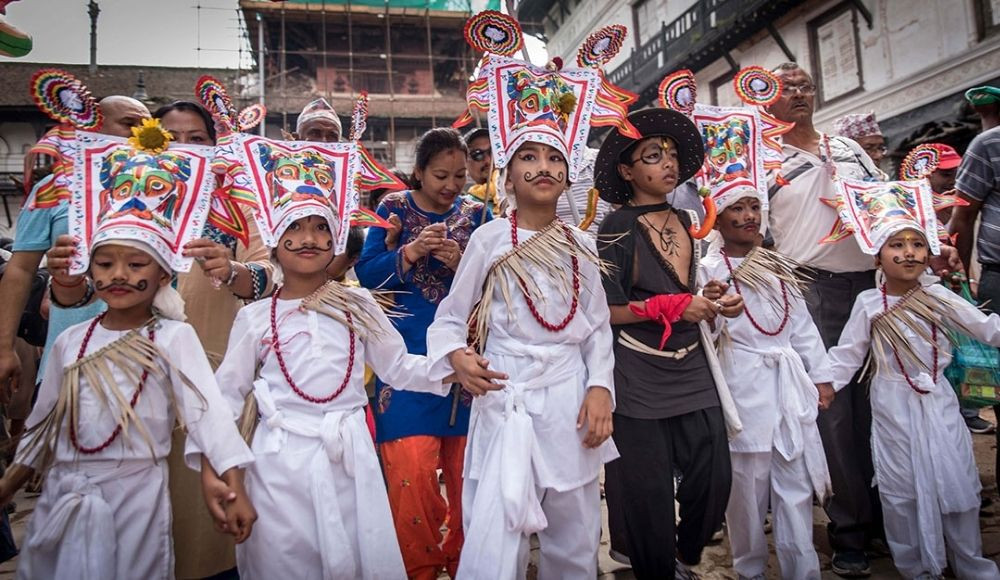 Gai Jatra is one of the most popular and traditional festivals in Nepal. Often, taken as the festival of sarcasm, this festival is popular in Kathmandu valley. This festival is mainly celebrated by the Newar community in remembrance of the deceased. The date is set according to the Nepali calendar. The festival falls on the first day of the dark fortnight during the month of August. It is celebrated to mitigate the sadness from the death of family members. During the festival, children in cow's appearance parade the streets with tremendous enthusiasm.

Gaijatra is a festival celebrated by the Newar people of Nepal. It's so popular, in fact, that it's celebrated all over Nepal!

Taking place somewhere in the middle of monsoon, Gaijatra is characterized by its openness, with the main festivities taking place on the streets. It celebrates good spirits and laughter, as well as reminiscing the deceased.

The festival is celebrated in the month of Bhadra in the Bikram Sambat calendar, which is somewhere between the months of August and September. Widely celebrated by the local Newar community of Kathmandu valley, this festival observes the active participation of youths and many people from the traditional city embark on the procession. It is observed for a whole week as per the tradition, which counts to eight days, to be precise.

Gai Jatra fundamentally began in ancient times when people used to fear ‘Yamaraj’- the god of death and worship him. The modern traditions of celebrating this festival is believed to have begun during the Malla reign. In an unfortunate incident, the son of King Pratap Malla died and to overcome the grief of his loss, the king ordered the procession.

Unfortunately, he made the eldest son Chakrabartendra Malla king of the kingdom, who died on the second day of his reign. The untimely death of the prince led the queen into deep sorrow. She started spending her days drowning in grief. The king could see his beloved in such a miserable condition and made all his possible efforts to improve her condition. To see his wife overcome the grief of the loss of their son, the King announced a parade in which the families who had suffered a loss were asked to participate. On that particular day, the King has given the freedom to crack jokes about the political scene and development and allowed the people of Kantipur to organize satirical functions that were illicit in ordinary days. As the procession began and passed across the palace, the king explained to the queen that the huge mass has also suffered the same grief that she is going through.

The procession was proven to be remarkable for the queen to realize that the death is continuous and there is not a single family in Kantipur that hasn’t experienced the grief and loss of a family member. Also, even after the grief of losing a family member, people haven’t stopped enjoying life and accepting it for what it is. Seeing people wearing colourful clothes, making jokes, laughing and celebrating the moments, the parade somehow convinced the queen of mortal life and the loss of her son as an irony of living beings.

During the parade, the people gathered in mass, cracked jokes and made savage remarks on some reputed persons of society. Further, the social injustice and other political events were satirized in a funny way. The overall mass gathering and the activities brought a smile to the queen’s face. Overwhelmed seeing the queen smiling, the king commenced the tradition of the Gai jatra celebration annually.

Kathmandu is shaped by various cultures and traditions. The culture of Kathmandu valley connects every nook and hook of the city in an incredible way. Gaijatra festival in Kathmandu valley has been an amazing festival of entertainment, satires and a display of chaotic political resurrection. During the times of early development, Kantipur city observed this festival with wonderful enthusiasm. It was celebrated and admired by many as this festival gave a sense of freedom to people and that overwhelmed the king and brought the serious issues of state to attention in a way of satire and jokes. 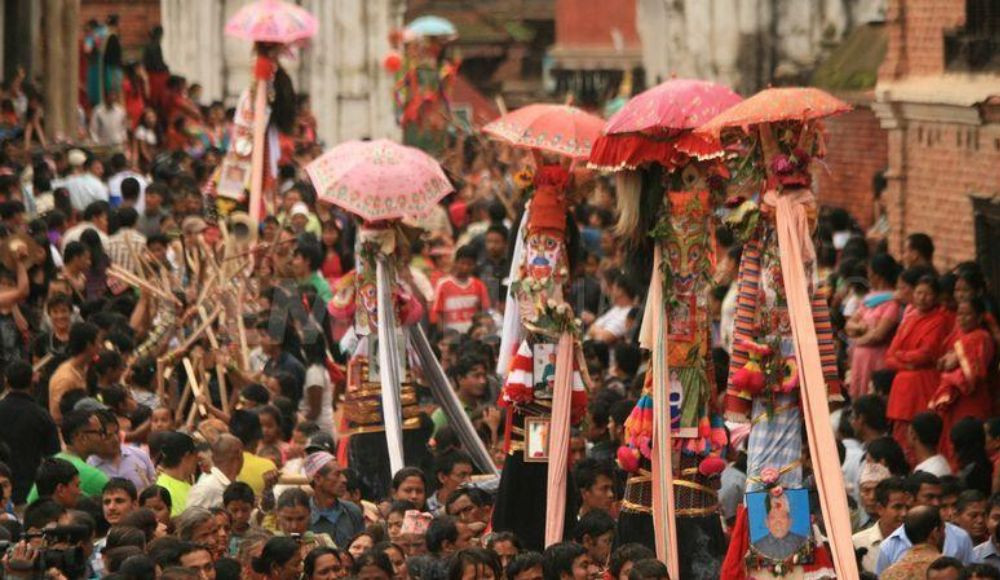 As time kept passing, the festival continued to impress the rulers with its amazing way of celebration. And till today, the festival marks a remarkable day where political events and social injustices are brought into the media and social spheres in a satirical way.

Kathmandu valley’s Gai Jatra is remarkably fascinating as the participation and enthusiasm of youths is overwhelming. The masked procession goes around the different parts of the old city and people celebrate happiness while reminiscing about the deceased. The performers get small packets of sweets, oats, fruits and other food from the different families around the city to help them tour the city. The bystanders observe the festival with a huge crowd and satirical performances and words are spread around the country through television and media.

Patan has a similar kind of procession for this festival as in Kathmandu. People in Lalitpur have another festival similar to Gaijatra called Matayaa which is followed by Hindu followers with much enthusiasm. The involvement of people in this Matayaa is very remarkable. The Gaijatra of Patan has similar parades and people participate in different satirical functions and events. 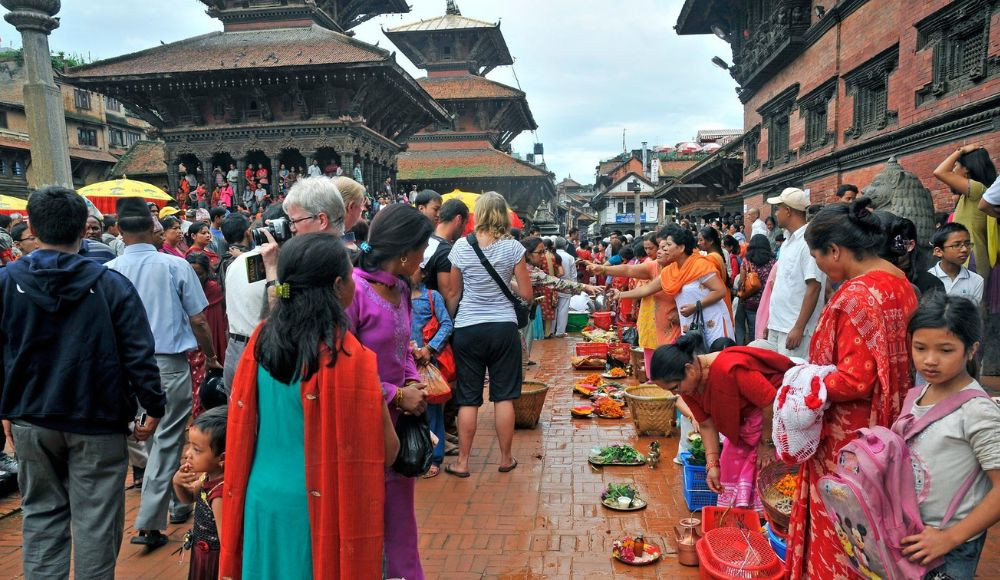 The Gaijatra of Bhaktapur is observed with huge enthusiasm by many people of Kathmandu valley. The procession is also unique and fascinating involving many festivities. A chariot of Taha-Machas is built using bamboo and toured around the city. The two-wheeled chariot is pulled by the youths and many other people from the city participate in the march. Some performers get dressed in Haku Patasi. The masks and face paintings worn by many participants are an amazing part of the festival. Diversity and peace are uniquely symbolized in the festival. 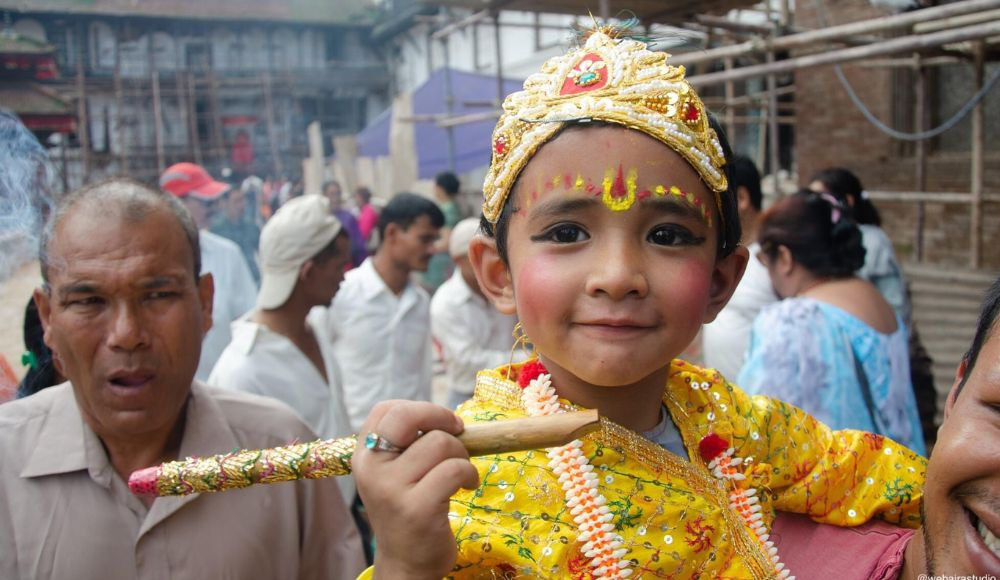 Mainly celebrated to remember the deceased, this festival also uses satire, humour and ironic comments to portray the injustices in the society. What makes this festival unique is the way people participate and enjoy the festival with zeal and enjoying the freedom of speech to the fullest. The Ghinta Ghisi dance, which is celebrated for a week, is an interesting performance that involves sticks and people hitting each other with it as in a machete game.

Kirtipur is a city known for its ancient architecture and culture. Mostly inhabited by the Newars, this old city has a unique way of celebrating festivals. Unlike other parts of Kathmandu valley, the historical touch to culture and festivities are widely prevalent in Kirtipur. The historical towns of Kipu dey, Panga, Naga, Bhajanga, and Yarwocha observe the Gai Jatra festival. 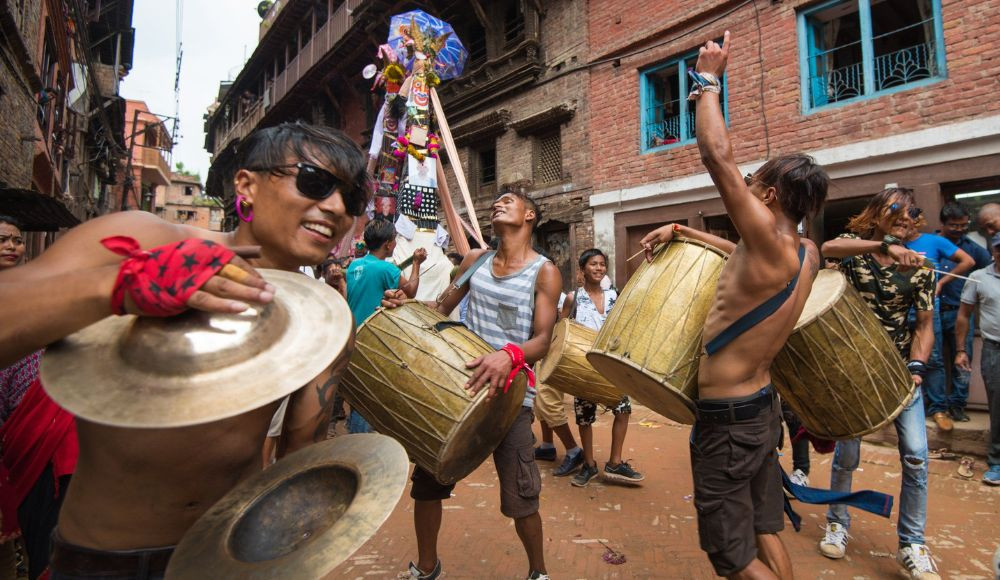 Farming and other stuff to maintain livelihood are still prevalent in old Newar town.

The men dress as women and visit door to door requesting to join them in the celebration. Music and dances are performed in households. This helps to create harmony among the neighbours. This old city carries many more beliefs and stories behind the celebration of Gai Jatra than other cities.

Gai Jatra festival is a celebration after sorrow or just a festival that is inclined towards making humankind close to the reality of life. People are destined to die and that is the ultimate reality of the mortal world. This festival teaches people to be a witness to the reality and suggests enjoying the time that is left on this planet. The Sanatan Hindu traditions have some epic tales that have a theory of Karma.  As per the religious tales, the deeds of this life reward the life after death. 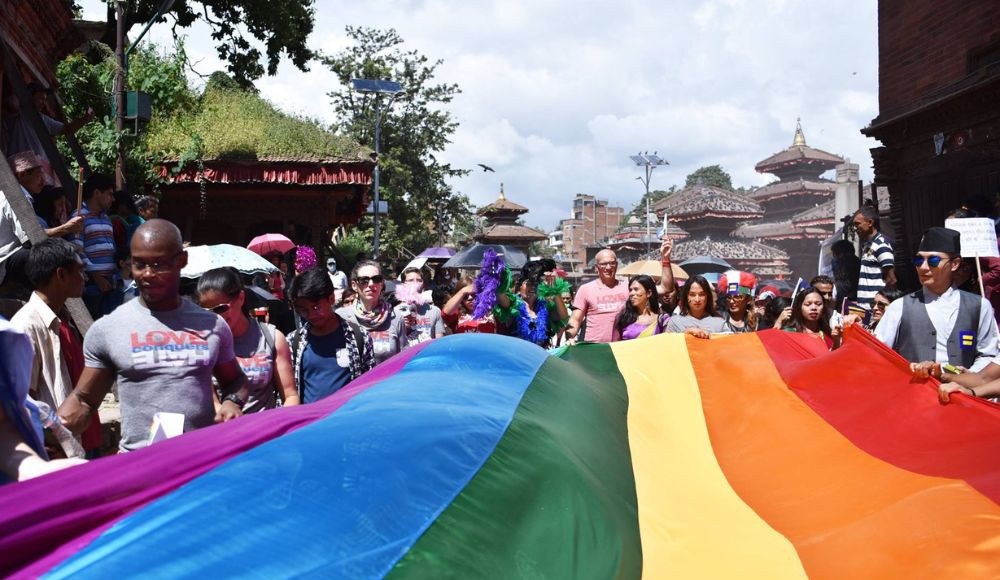 Though the festival was created in a royal conjecture, the festivities of Gai Jatra are still relevant today. The satires and freedom of speech to raise the state issue in a humorous way helps to maintain a state-people bond. The importance of this incredible celebration is somewhat compared to a day of depicting the bad political scene and the mockery as a part of political participation. If you are planning to visit Nepal during August and September, grab the opportunity of becoming a witness to observe the festival that celebrates life over death and elevates the capacity to question the state issues.

As a part of the festival, the members of the deceased family send a cow for the procession. In the morning, the cows are bathed with the special cleaning of their tails. The people worship the cow, put Tika on it and then the procession starts around the valley. As cows are not common in cities nowadays, young boys from the family dress as a cow. Various cultural programs are conducted and many nearby villages participate in the ceremonies.

The first and second days are the most important days of the Gai Jatra festival. The deaths are given tribute and the procession is carried out in the city. After the procession, the gathered mass enjoy the humour, jokes, songs and dances. The second day of Gai jatra observes Mayata. It is a process of visiting Newar temples around the city. The butter lamps and other offerings are made to the deities in temples. This festival has a separate fanbase of comedians, politicians and the public.

The comedy shows are premiered in different cities and are enjoyed by people. This festival, thus, is an amazing festival in Nepal that is widely enjoyed by the national public.