The Patan Durbar Square, Bhaktapur Durbar Square and Kathmandu Durbar Square, which served as a palace during the Malla reign, are the modern-day open-air souvenir market, a perfect stroll escape and the gathering place for many people in the capital. 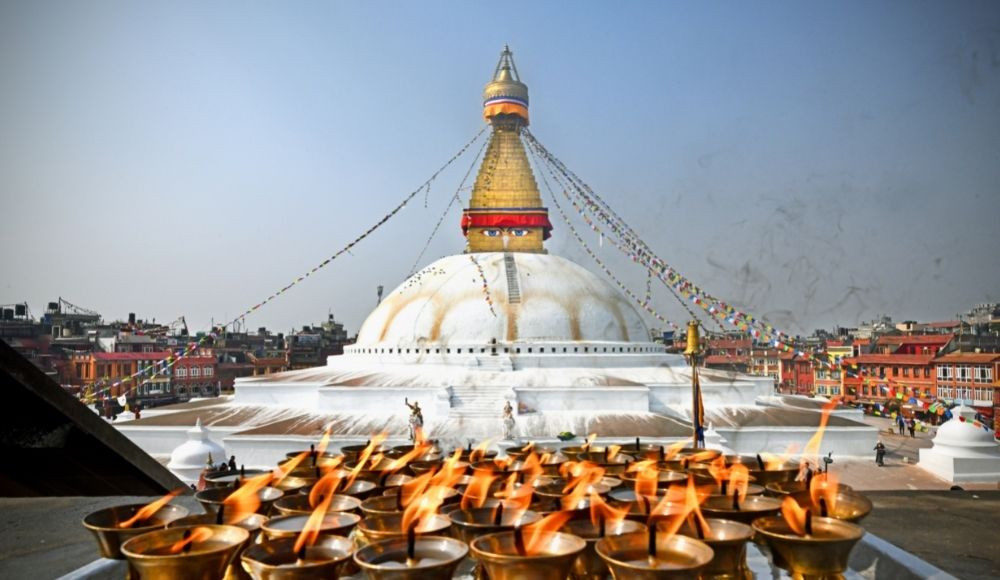 Kathmandu valley is not only the political but also the cultural capital of Nepal. 7 out of 10 UNESCO enlisted world heritage sites of Nepal lie in Kathmandu valley.

The cultural world heritage sites in Kathmandu valley reflect the best glimpses of medieval art and architecture. The temples, stupas, and the Durbar Squares of the valley are the finest structured and a wonderful illustration of exemplary carvings and handicrafts.

Kathmandu valley is the city of temples and stupas. Foods and the pavements, alleys and the stupas around the city are best molded to stroll around, having the mind-blowing views of the ancient cultural constructions.

The intricate tapestry of culture and tradition is closely associated with the inhabitants of Kathmandu valley. Furthermore, the indigenous ‘Newars’ have a lot of cultural retreats at the community level which is also a fascinating sight to explore during your visit to Nepal.

The 7 world heritage sites in Kathmandu Valley comprises the 3 ancient Durbar Squares and 4 Temple and Stupas.

Majority of the people in Nepal follow Hinduism, that could be the reason Nepal is known for its Hindu-centric philosophy all over the world. The significantly known and revered Hindu temple Pashupatinath and Changunarayan and the holy abode of Buddha, Boudhanath and Swayambhunath lie in Kathmandu valley.

Three districts of Kathmandu valley were three distinct Kingdoms in the past. The Patan Durbar Square, Bhaktapur Durbar Square and Kathmandu Durbar Square, which served as a palace during the Malla reign, are the modern-day open-air souvenir market, a perfect stroll escape and the gathering place for many people in the capital.

Pashupatinath temple is one of the most important and sacred Hindu temples in Nepal. It is situated just 3 KM from the Tribhuvan International Airport in the eastern part of Kathmandu Valley.

The temple complex, consisting of an array of temples, ashrams, idols, and inscriptions, is located on the bank of the holy river Bagmati. Because of its historical, cultural, and religious significance, the temple complex was inscribed on the UNESCO World Heritage Sites list in 1979.

Many legends surround the origin and construction of the temple. However, it is widely believed that the shrine was established by Pranchanda Dev in the 5th Century. Numerous other temples were raised on the bank of the Bagmati river over the centuries. 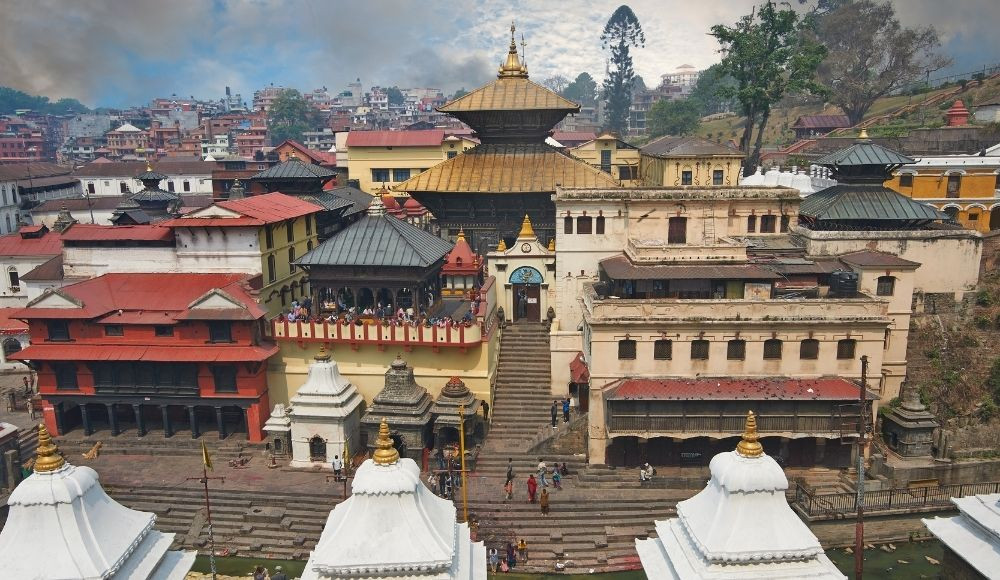 The main structure, built-in pagoda style with two levels of copper roofs with gold covering and four doors covered with silver sheets have a gold pinnacle (Gajur). The temple houses a sacred lingam, a holy symbol of Lord Shiva. Interestingly, only four Bhatta/Bhat priests are permitted to touch and worship the deity.

Lord Shiva is considered to be the supreme God of  Hindu mythology. Pashupatinath temple receives its biggest crowd on the festivals Maha Shivaratri and Teej where thousands of pilgrims queue for hours to get a glimpse of the sanctum. Especially during the Maha Shivaratri festival, Shiva’s devotees all around the globe pilgrim to the holy temple.

This heritage site of Kathmandu spreads over 0.64 hectares of land encompassing 518 temples and monuments. Tourists may even venture to the opposite side of the river to have glimpses of Hindu funeral rites in the bank of Bagmati along with holy shrines. Also, the evening Aarti ( Sandhya aarti ) on the bank of Bagmati fills the ambience with peace and divinity, which is a must in the to-do list, when one visits the World Heritage Site.

Boudhanath, the biggest stupa in Nepal located in the northeast outskirts of Kathmandu, is the major attraction to witness Tibetian Buddhism. The colossal Chorten is surrounded by a circular market, which is renowned for Tibetian art, crafts, and cuisines, and the holy stupa is believed to be built in the 6th century. 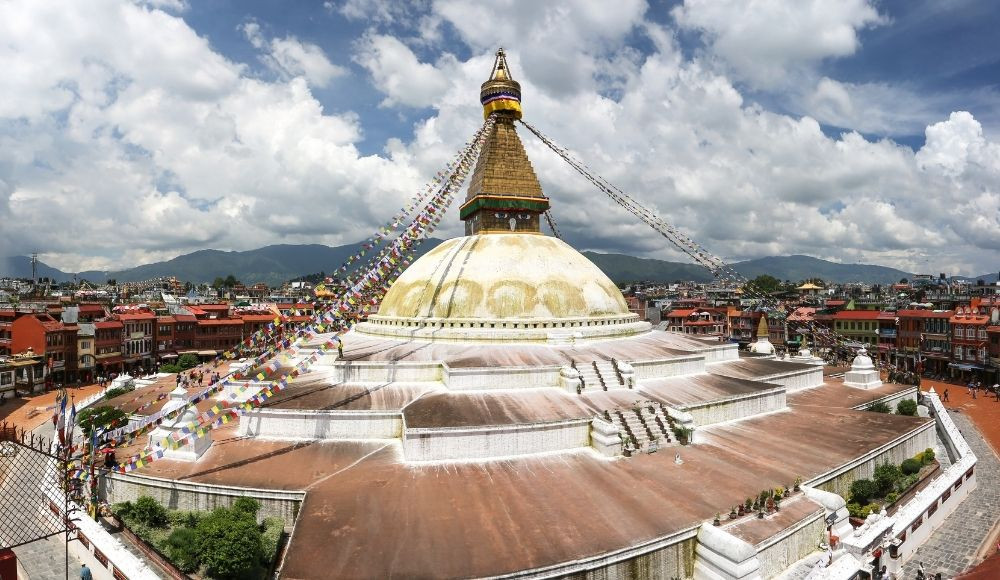 The 36-meter high stupa dominates the skyline and provides one of the most fascinating specimens of stupa design It rests on a series of three terraces, which from aerial view takes the shape of a lotus flower. The four pairs of eyes of Lord Budhha in the four cardinal directions keep an eternal watch over all the people and their doings.

Boudhanath's surrounding is often cited as “Little Tibet '' in Kathmandu as most of the Tibetian refugees decided to settle near Boudha in the 1950s and have been offering their prayers ever since. The beautiful surroundings with monasteries, typical Tibetan restaurants, art galleries, and street vendors add splendor to the tour.

One can find Tibetan devotees going around the stupa spinning the prayer wheels, and young people savoring Momos, Thukpas, and Laphings from vendors, during their tour. Boudhanath received a large number of devotees during Budhha Jayanti and Lhosar.

Swayambhunath is an ancient religious shrine located atop a hill in the western part of Kathmandu. The sanctum is a perfect example of religious harmony as Newar Buddhists, Tibetian Buddhists and Hindus offer their prayer under the common roof of Swayambhu. The eastern part of the shrine offers a fascinating bird’s eye view of the Kathmandu Valley. This Heritage site in Nepal is popular for its huge Buddhism significance.

Many legends surround the creation of the holy sanctum, with Newars and Buddhists believing their versions. However, ancient inscriptions suggest that it was built in the 5th Century. The stupa consists of a dome at the base, above which is a cubical structure painted with Buddha’s eyes looking in the four cardinal directions, mounted by thirteen tiers and a Gajur (Pinnacle) at top. The dome at the base represents the entire world whereas the two eyes of Buddha represent compassion and wisdom.

In the temple surrounding, you may see monkeys swinging from one branch to another or attempting to snatch packets of chips from visitors. Because of the massive presence of monkeys, Swayambhunath is widely known as The Monkey Temple.

The prayer flags, prayer wheels, aroma of incense, and sacred chants of monks bestow serenity during the tour of the ancient sanctum.

Changunarayan is the oldest temple of Nepal located at the high hilltop of Bhaktapur near the Changu village, about 15 kilometres away from Kathmandu city. The ancient temple of Lord Vishnu is surrounded by a champak forest. 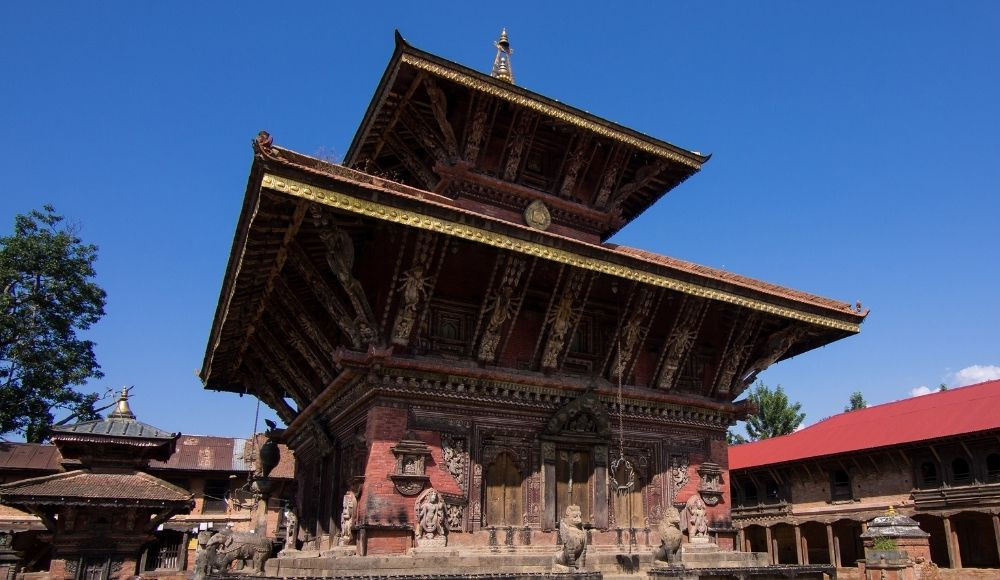 Changunarayan temple was built in the 3rd century. King Mandev erected a stone pillar in the temple’s courtyard in 464 which has an inscription in Sanskrit; the inscription is considered as the oldest inscription of Nepal.

The architecture of the temple resembles Pagoda style as well as Shikhar style but architects claim it is neither, instead it is a traditional Nepali temple. Inside the courtyard of the main shrine, there are temples of Lord Shiva, Ashta Matrika, Chhinnamasta, Kileshwor, and Krishna The temple also bores the sculptures of Vishnu’s ten incarnations; Vishwaroop, Vishnu Vikranta, Vishnu riding Garuda, Nar-Singha Vishnu, etc.

There are two museums in the vicinity of Changunarayan Temple, where visitors can learn more about the historical and cultural significance of the temple. Numerous fairs and Jatras are celebrated in the temple during special occasions like “‘Haribodhini Ekadashi’, Jugadi Nawami’ etc. This is one of the most important and religiously significant heritage sites in Nepal.

Kathmandu Durbar Square, located in the heart of Kathmandu, is an ancient royal palace, resident of Nepali Monarchs until the 19th Century. It is popularly known as Hanuman Dhoka Palace, named after Hanuman, a monkey god in Hindu mythology, who is believed to be the protector of the Palace. 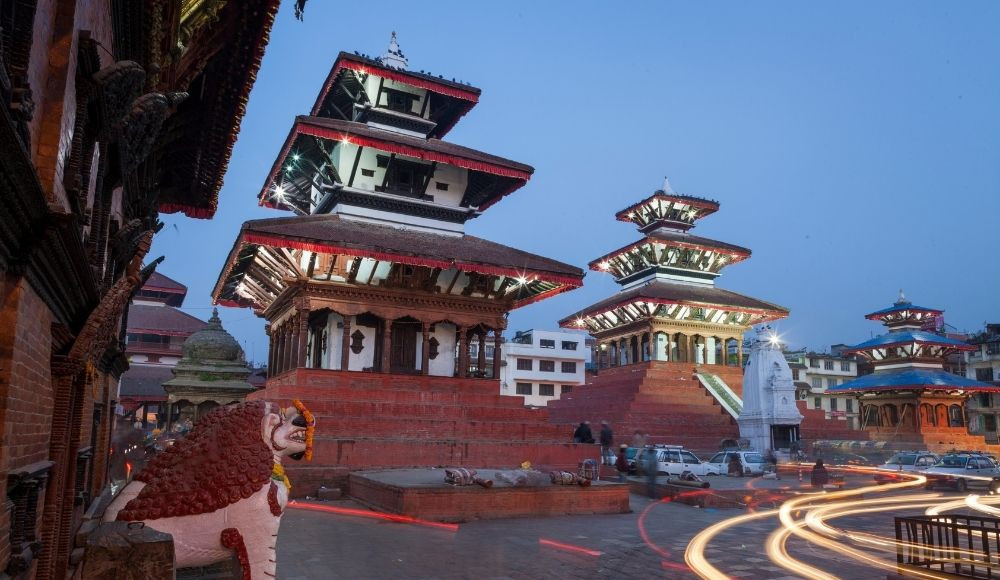 It's been the most easily accessible world heritage site in Kathmandu. The Durbar Square features temples, palaces, courtyards, monuments, and statues from the 12th -18th century.

Kathmandu Durbar Square was built by Newari Malla Kings over the centuries. Jayaprakash Malla, the last Malla king to rule Kathmandu built the Kumari Bahal, the residence for Kurmari – the living Goddess.

During the Shah dynasty that followed, several temples and palaces were built including the Nautale  Darbar, Basantapur Durbar, and the Gaddi Darbar. Other iconic monuments of Kathmandu Durbar Square include Taleju Temple, Jagannath Temple, Kal Bhairav; the statue of the King Pratap Malla in praying gesture, and Kasthamandap.

The temples are being preserved as national heritage sites and the palace is being used as a museum open for visitors.

Busy local markets like Indra Chowk and New Road lie in the vicinity of Kathmandu Durbar Square. The Square was heavily impacted by the earthquake of 2015, as palaces and temples crumbled into rubles. However, the reconstruction of the square is almost completed and the palace retained its old glory.

Bhaktapur Durbar Square, located in the center of Bhaktapur, is among the best collection of medieval art of Nepal from where Malla Kings of Bhaktapur ruled over their kingdom. It was among the three medieval kingdoms of Kathmandu Valley. The 55 windowed palace, completed in 1754 is one of the most iconic palaces of the square. Likewise, Natyapola temple, the five-storied tallest pagoda temple of Nepal, fascinates visitors with its architectural perfection and artistic beauty. Vatsala Temple, Statue of King Bhupatindra Malla, Golden Gate are other popular structures for sightseeing.

The unique art of wooden carving and pottery is another major attraction. Also, Bhaktapur is a place where visitors can find close-up hand manufacturing passed down from generations. Likewise, the tour is incomplete without savoring “ JuJu Dhau” (king curd), the popular yoghurt of Bhaktapur.

Krishna Mandir, built in 1667 by Siddhi Narsing Malla, is one of the most important temples of the square. The temple with 21 gold pinnacles (Gajur) is built in a local variation of the local variety of Shikhara style called Granthakuta. 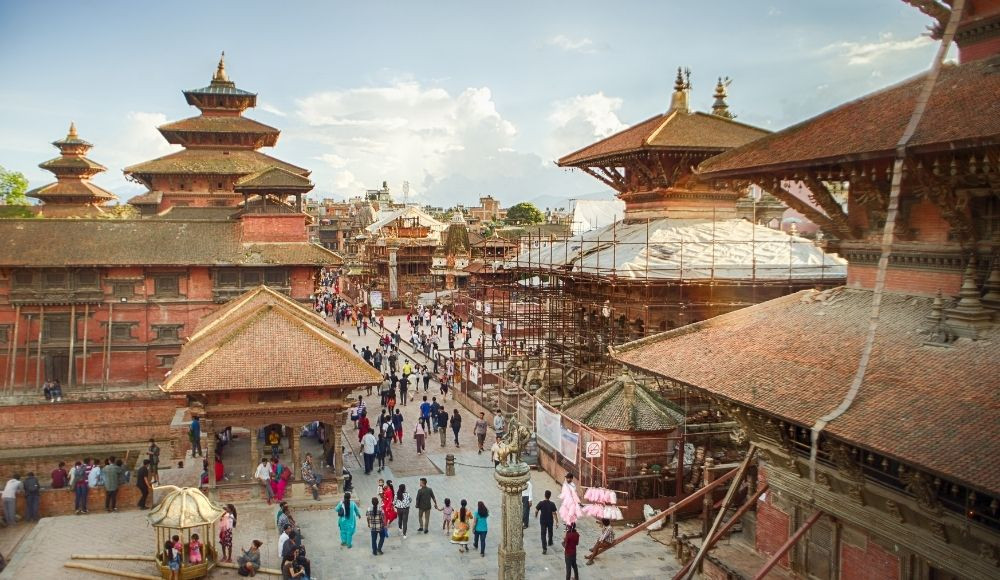 Patan is popularly known as the city of fine arts.  The art galleries in the surrounding depict the cultural synergy of Hinduism and Buddhism. It is also home to Kumari of Patan, the living goddess of Patan. Rato Machindranath Jatra and Bhoto Jatra are famous Jatras of Patan.

In conclusion, the Kathmandu valley is rich in culture and heritage. The 7 UNESCO listed world heritage sites in Kathmandu valley are an example of it. Besides this, Kathmandu is known as the city of temples which recognized the ancient heritage of the valley.