A blue-green lake of the Dolpo region. 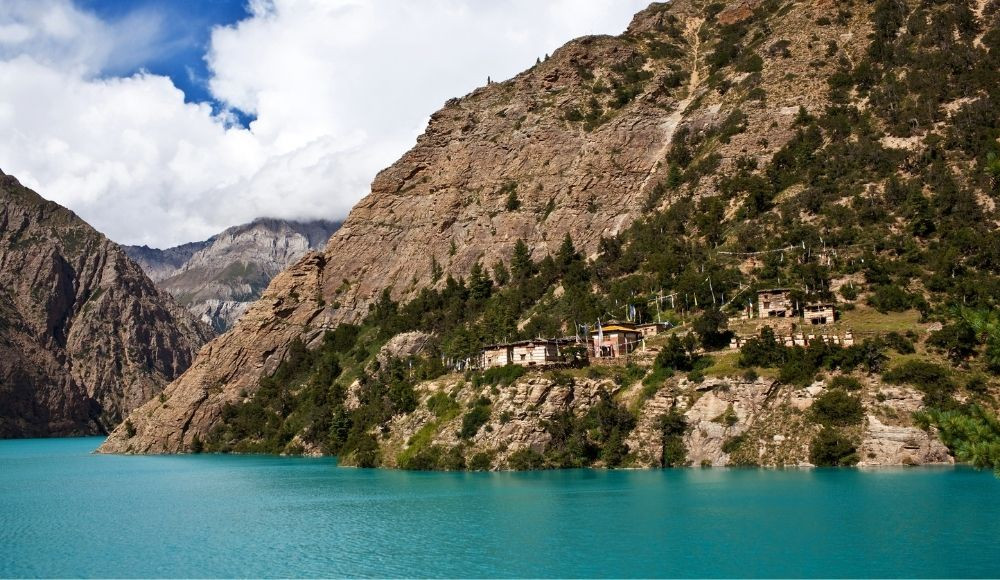 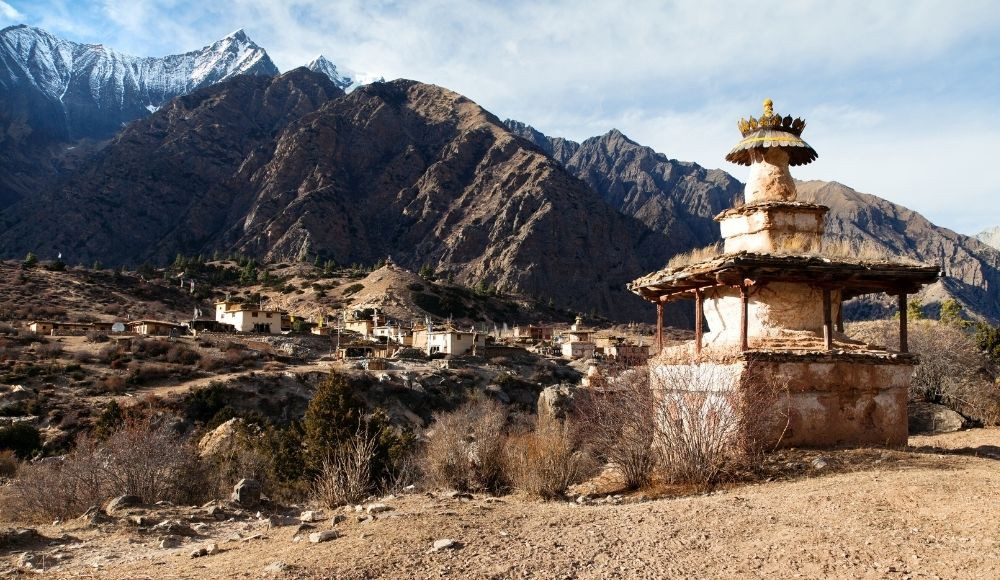 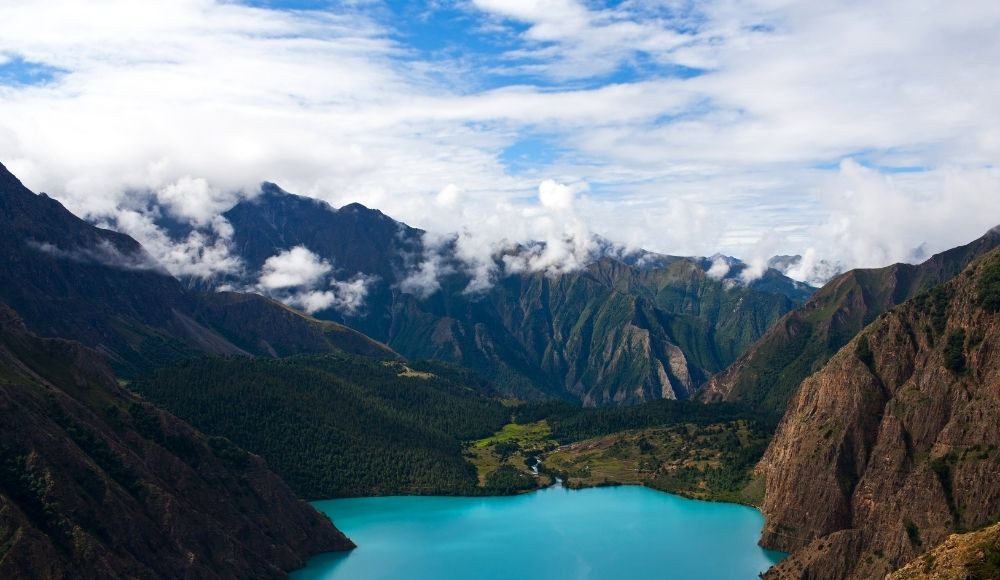 Spring (March, April, and May) are the best seasons for trekking to Phoksundo Lake. During these seasons, the weather is perfect and the temperature is moderate. So, trekkers can enjoy the best sightseeing of blooming rhododendrons, magnificent views of Dhaulagiri and other ranges. Monsoon (June to August) is not favorable because of harsh weather, coldness, and muddy-slippery roads.

Shey Phoksundo Lake Trek is one of the popular treks in the western part of Nepal. Meanwhile, situated at an elevation of 3,640 meters above sea level, Shey Phoksundo is also one of the most popular lakes of Nepal. Trekking in the Shey Phoksundo National Park of Nepal is an amazing experience. You will get to witness some of the rare and endangered species of flora and fauna along with the beautiful lake, waterfall, valley, and many more throughout the trek.

In addition, this trek provides you with an opportunity to explore remote areas. Crossing the ancient salt trade route, view of yak caravans, and crystal clear views of Kanjirowa Himal on the oligotrophic Phoksundo makes your trip memorable. Trekkers will ascend and descend through traditional villages like Dunai, Chhepka, Jharana Hotel and Santa. During the trip, trekkers will see the beautiful 167 meters waterfall. Several endangered species like Musk deer, snow leopard, blue sheep, Himalayan Thar, etc. are found in this region.

A scenic flight will take you to the trek starting point. Similarly, you will fly back to Kathmandu from the same point after trekking for a week in the western part of Nepal. Jhupal is the trek starting point and can be reached after a scenic flight from Nepalgunj. The residents of upper Dolpo follow Tibetan culture whereas lower Dolpo residents follow Buddhism. Some of them also follow the Bon-Po religion. The Bon-PO followers round the monasteries in an anti-clockwise direction.

This blue-green lake of the Dolpo region is considered as the sacred lake by the Buddhist monk. Situated at an elevation of 3,640 meters above sea level, Shey Phoksundo Lake is visited by more than 2,000 visitors every year. Shey Phoksundo Lake is the deepest lake of Nepal and also is one of the untouched and unexplored trekking trails of Nepal. The maximum length of Phoksundo Lake is 5.15 square kilometers and the maximum width is 800 meters. Similarly, the maximum depth of the lake is 145 meters. There are more than 2o stupas in the southern belt of the lake and one in the eastern belt. Annual prayers and worship are carried out during some of the special days of the year.

If our trip itinerary doesn’t suit your holiday schedule or you wish to modify the itinerary then feel free to inbox us. We want our valuable guests to enjoy their travel according to their needs and wills. We provide a variety of packages for student groups/family groups/corporate teams and many more. Every travel package is different according to the group size and the demand of the guests. We are also more than happy if you combine it with any travel plans, please let us know and we’ll create a tailor-made itinerary, designed especially for your travel group.

Your Arrival Time (?) Our office representative will meet and greet you at Kathmandu Airport and transfer you to your hotel in Kathmandu. At 06:00 PM: In the evening we will meet for a coffee and will brief you on the details of your trek program.

*Optionally you can add one additional night stay in Kathmandu to cover cultural sightseeing in Kathmandu as well for your trek preparation shopping.

At 09:00 AM: This day we will prepare the paperwork for the restricted area trekking.  In the afternoon we will be flying to the Nepalgunj on the southwestern side of Nepal which is also considered as the gateway to the far west.

Flight to Juphal, Trek to Dunai

At 06:00 AM: Today early morning we will take the flight to Juphal which is on the northern side of Nepalgunj. The small aircraft will take us to the beautiful airport in Juphal. The view of mighty snow-capped peaks is visible throughout the flight. Juphal is our starting point of the trek and from here we will start our first day of the trek. The trail mostly goes from the bank of the Bheri river, passes through the beautiful villages and maize fields. The trail today is mostly descending down to the Dunai village. Overnight at Dunai.

At 07:30 AM: After breakfast, we will leave behind Dunai village and continue to descend down to cross the Bheri river and continue our trail to the northern bank of the river. The trail then takes us to the Sunlight which is followed by Shey Phoksundo national park check post. The trail ascends up from here and passes through the hemp fields before reaching Kageni village. The view of magnificent waterfalls, lush vegetation, and the tropical forest is throughout the trail reaching Chhepka. Overnight at Chhepka teahouse.

At 07:30 AM: After breakfast, we will start our trek towards the Jharana hotel. Today we will get the first view of Phoksundo lake from the distance. The trail today passes through the wide meadows and forests. The George of Phoksundo is just below us when we pass through the meadows. After the climb, we will see one of the most beautiful and largest waterfalls. Overnight at Jharna hotel.

At 07:30 AM: Today we will explore the Ringmo village., Phoksundo lake, surrounding areas, and monasteries. Phoksundo Lake is an alpine turquoise-colored freshwater lake and the deepest lake of Nepal at 3,600 m. We will visit a 900-year-old Bon monastery,  Tshowa Gompa. The lake is famous for its striking turquoise color and spectacular scenery. Overnight at Ringmo.

At 07:30 AM: After breakfast, we will start to descend back towards the Chhepka village. The trail passes through the lush green vegetation, birch forest, tropical forest Phoksundo Khola, Bheri river and various wildlife. The trail is at the bank of the river and the soothing sound of flowing water doesn’t leave us throughout the trail. Overnight at Chhepka village.

At 07:30 AM: The last day of our trek starts after breakfast. We will be heading towards Dunai town and then further to Juphal village. Today’s trail is a rocky trail alongside the Bheri river. We will leave the Shey Phoksundo national park and head towards the Juphal. Overnight at Juphal village.

Flight to Nepalgunj, Flight to Kathmandu

At 06:30 AM: today we will take an early morning flight from Juphal to Nepalgunj. After reaching Nepalgunj we then further fly back to Kathmandu and celebrate our final dinner together. Overnight at Kathmandu hotel.

You will be free until your flight time; we will drop you at Kathmandu Airport 3 hours before your flight.

Get all related details about the Phoksundo lake trek of Dolpa, Nepal, or feel free to contact us.