Located in the Khumbu region of Nepal, Gokyo lakes trek is one of the most popular picturesque valleys of Nepal. It is an ideal choice for the trekkers who are willing to explore the Everest region of Nepal in the less crowded area. Renjo la pass that lies at an elevation of 5,340 meters above sea level is the highest point of the Gokyo valley trek. Starting from Lukla the trek ends at the same point.

Meanwhile, you can also experience the scenic flight to Lukla and back to Kathmandu. During the flight you can have marvellous views of the high mountain ranges. Everest, Lhotse, Cho Oyu and Amadablam are some of the major mountain ranges that can be seen during the Gokyo lakes trek in Nepal. Besides that, you can also witness the highest freshwater lake system of the world.

Our Gokyo lakes trek starts after a scenic flight to Lukla Airport. During the flight you can have the marvellous views of the mountain ranges and the valleys. You can also witness Everest, Lhotse, Makalu, Cho oyu and many other mountain ranges during the 30 minutes flight. Upon reaching Lula you will meet the rest of the team and start walking. Monjo is the stop point of the first day of the trek that lies at an elevation of 2,835 meters above sea level. Besides that, you can also choose to stay overnight at Phakding village.

During your trek to Namche Bazaar you will pass through some of the rural villages and vintage gompas and monasteries. The sherpa capital is the main highlights of the trek and you can also meet with other hikers or have a hike to nearby places during the acclimatization day. Dole lies at an elevation of 4,200 meters above sea level.

During the sixth day of the trek you will reach Gokyo lakes and you can also take a hike to Gokyo ri the next day. The best view of Gokyo 5 and Everest can be seen from Gokyo ri. Renjo la pass is the highest point of the Gokyo lakes trek that lies at an elevation of 5,340 meters above sea level. After crossing this pass you can reach Lunde and then to Namche Bazaar. From there you will take the same route to reach Lukla and fly back to Kathmandu.

Gokyo lakes are the highest altitude lakes that lie in the Khumbu region of Nepal. Altogether there are 19 lakes in the Gokyo valley, but among them six of the lakes are the major lakes. Among all the lakes, Thonak lake is the largest. Similarly, The minimum elevation of Gokyo lake is 4,700 meters above sea level and the highest elevation is 5,000 meters above sea level.

Sagarmatha National Park is the most popular national park of Nepal that lies in Province 1 of Nepal. Established on July 19, 1976 it covers an area of 1148 square kilometers. Meanwhile, this national park was included in the UNESCO world heritage site in 1979. Besides being the home to rare species of flora and fauna, Sagarmatha National Park also holds some of the deep valleys, glaciers, lakes as well as the 8 mountain ranges above 7,000 meters.

The warm hospitality of the sherpas are also the major things to experience inside the Sagarmatha national park. Besides that you can also learn the tradition and culture of the local Sherpas. Some of the most popular areas around the Sagarmatha National Park include the Namche Bazaar, Dingboche, Everest Base Camp, Kalapatthar, Gokyo Lakes, Gokyo Ri and many more.

You can reach Lunde village after crossing the Renjo La Pass from Gokyo Lakes. The alpine glacial views and snowy trails are the exciting part of this pass. Renjo La pass is one of three major passes in the Everest region.But the scenarios, landscape and the sherpa culture are worth any difficulties during the trek. Trekking route to Renjo La Pass is less crowded than other trekking routes of the Everest Region. So it is a must place to try if you are willing to trek in the less crowded trekking route of the Everest region.

March, April and May are the best time for trekking in the Gokyo lakes trek in Nepal. Meanwhile, during this season you can also witness the beautiful rhododendron flower blooming in the lower parts of the trek. Similarly, another best time for Gokyo valley trek is during the months of September, October and November. Due to high visibility you can witness the astonishing views of the mountain ranges during these months of the year.

Gokyo valley is a moderate to difficult level of trek that lies in the Khumbu region of Nepal. The trail to Gokyo lake is not so difficult, but the trail to reach the Renjo la pass is one of the difficult parts of the trek. The altitude of the Renjo La Pass is 5,340 meters above sea level. Because of that there are high chances of getting altitude sickness. Because of that you will need to slowly gain altitude in order to avoid altitude sickness. But no technical climbing skills are required to cross the pass.

Daily 6-8 hours of walk is required to complete the trek in time. This trekking trail gets comparatively less travellers than that of Everest base camp trek. But the trail is easily navigable as there are various sign boards throughout the trekking trails. Meanwhile, you will need to walk steep uphill as well as downhill of the rough trails of the himalayas. Because of that, the hikers must be physically fit and regular exercise a few weeks before the trek is a must.

At 06:00 PM: In the evening we will meet for a coffee and will brief you on the details of your trek program. You will get every necessary information you need for trekking in the Everest region. All your paperwork and permits will be made available to you, to be kept with our guide. In the evening, you can explore the Thamel area. The nightlife around Thamel is vibrant.

At 08:00 AM: You will visit for a full day sightseeing of Kathmandu Durbar Square and Swayambhunath, Boudhanath and Pashupatinath temple. After sightseeing, you can shop for trekking and get the necessary gear from the trekking shops around Thamel.

In the evening, the briefing for the trek will be provided by one of our informed representatives. If you have any queries and want to know anything, you can ask our representative.

Fly to Lukla, Trek to Monjo

At 08:00 AM: After breakfast, you will take a drive to Tribhuvan Airport. After that, you will take a flight to Lukla airport also known by the name Tenzing Hillary Airport. The airport itself is also a major attraction of the day. Plus, the scenic flight to Lukla is admirable. You can get aerial views of the Khumbu region and Sagarmatha National Park. Upon reaching you will meet other members. Trekking to Monjo takes around 4-5 hours to reach Kathmandu.

After that, you will start moving. You will pass through Phakding before reaching Monjo for the overnight stay.

At 08:00 AM: You will start the trek to Namche Bazaar after breakfast. It is one of the difficult days of the trek as most of the trekking trails of the day are steep uphill climbs. Namche Bazaar lies at an elevation of 3,440 meters above sea level and is also known by the name Sherpa capital. Similarly, there are many hotels, restaurants, pubs and many more are available around the Namche Bazaar.

Namche Bazaar is one of the most admired places in the Khumbu region of Nepal. This is also known for its amazing offerings, Sherpa settlements and monasteries in the area.

At 08:00 AM: After breakfast, you are free for the day. During the rest day at Namche Bazaar, you can interact with the locals as well as the other hikers. Besides that, you can also learn the tradition and culture of the locals. Similarly, this day can also be used as the exploration day. During the day you can hike to Hotel Everest view or to Khumjung. Besides that, you can also take a hike to the Khunde village which is popular for having the skull of the Yeti. Overnight stay at Namche Bazaar.

At 08:00 AM: After breakfast, you will start the trek to Dole village from NamcheBazaar. The distance from Namche Bazaar to Dole is about 11 kilometres. During the day you will have to walk steep uphill and downhill climb a few times to finally reach Dole for the overnight stay. From Phortse you will follow the Dudh Koshi river to reach the Dole village.

In the initial phase, you will be trekking in the same trail of Everest Base Camp, but a little ahead of Namche after about 2 hours of hike, the trail separates towards Gokyo Lakes. After getting in the Gokyo lakes trail, you will trek towards Mongla village. Passing through several waterfalls and some Sherpa villages, you will reach Dole.

At 08:00 AM: The distance from Dole to Machhermo is about 6 kilometres only. Meanwhile, you will have to walk steep uphill during most parts of the trek. Machhermo lies at an elevation of 4,400 meters above sea level. Besides that, you can also have marvellous views of the high mountain ranges during the trek. Overnight stay at Machhermo.

At 08:00 AM: The total distance of the trek today is 12 kilometres. To witness the marvellous sunrise view over the mountain ranges from the top of the Renjo la pass, we will need to start early. The cold wind that blows post noon makes it difficult to cross the pass. Because of that, we also need to start the trek early. The trail to Renjo la pass is a steep uphill walk. However, after that, you will descend downhill until Lunde or Lungdhen for the overnight stay.

At 08:00 AM: After breakfast, we will start the trek. The total distance of the trek today is about 18 kilometres. But the trail today is a complete downhill walk. Besides that, you can also choose to stay overnight at Monjo or Phakding village too. The total duration of the trek from Lunde to Namche Bazaar is about 6 hours. Namche Bazaar, also known as the Sherpa capital, boasts a wide range of facilities in the entire trek. There are a few coffee shops, hotels, spas and several nightclubs to explore in Namche.

At 08:00 AM: The trek to Lukla is the last day of hiking. During the day you will follow the same route to reach Lukla from Namche Bazaar. Upon reaching Lukla you can check in the hotel and enjoy your last day in the Khumbu region. The trekking to Lukla takes about 6 hours to complete.

At 08:00 AM : Wake up early and have your breakfast. After that we will move toward the Tenzing Hillary Airport to take a flight back to Kathmandu. Upon reaching Kathmandu you will check in the hotel and you can have free time. We will meet in the evening and have a farewell Nepali dinner together.

At 08:00 AM : You will be free until your flight time; we will drop you at Kathmandu Airport 3 hour before your flight.

Find out a brief information about Gokyo lake trek and let us know any query if you have further. 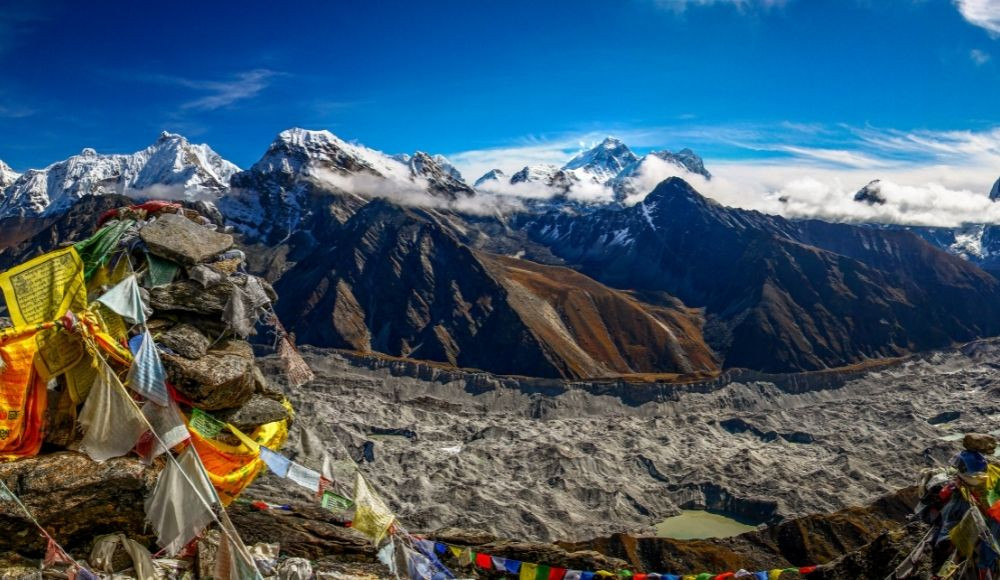 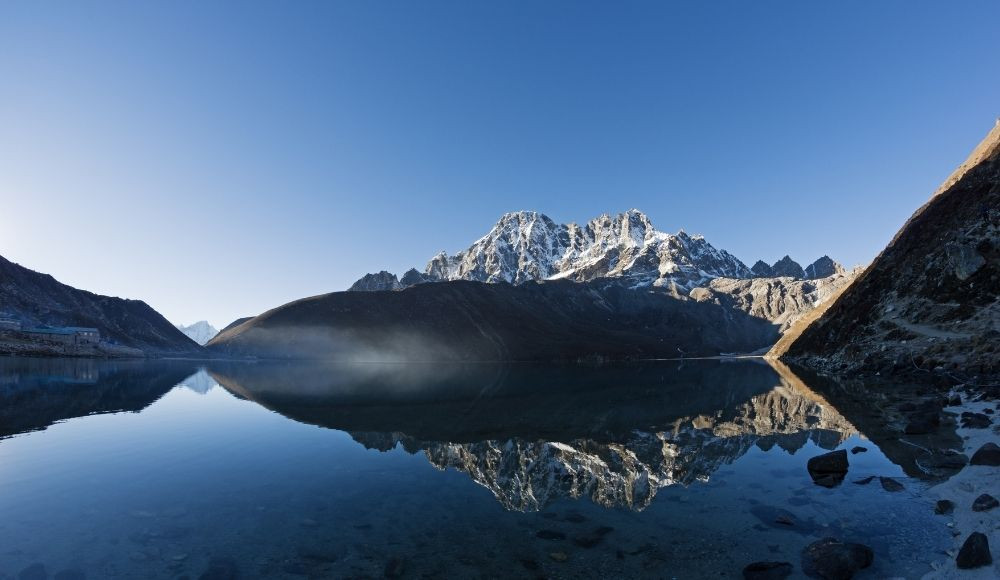 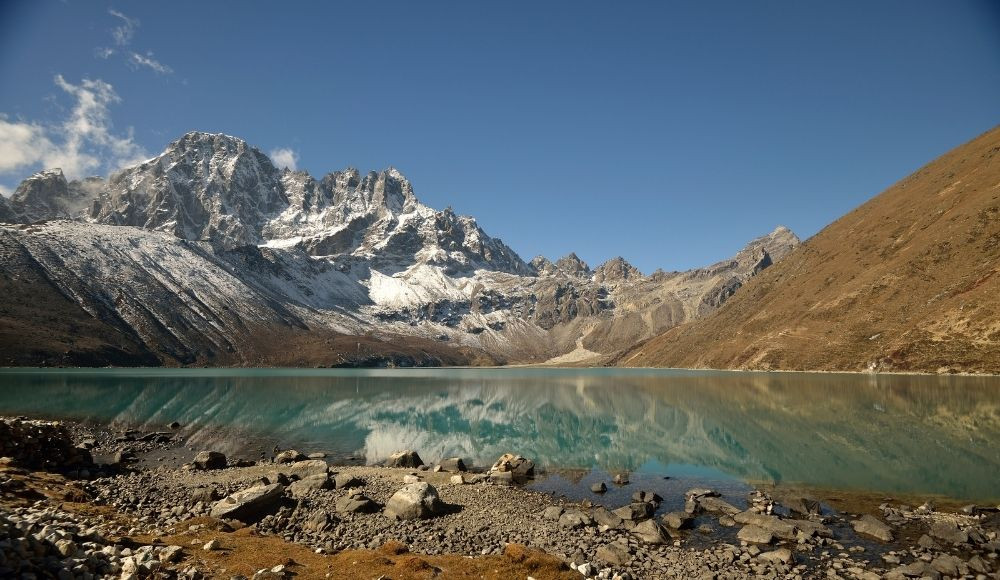