Complete the famous Annapurna base camp trek in a 7 days period!

Annapurna base camp 7 days trek is one of the most popular treks in the Annapurna region of Nepal. It is a Diverse trek where you will be passing by countryside villages of ethnic Nepalese people, lush forest and shrubs. Annapurna base camp 7 days trek is comparatively short as well as the easy treks of the annapurna region. Meanwhile it is also one of the best trekking routes in Nepal.

It is an ideal choice for the trekkers who are short on time but still wish to experience the beauty of the mountains and the hills of Nepal. Within a short time of one week you can experience all the astonishing beauty of nature. During this trek the highest point is the Annapurna base camp. Annapurna base camp lies at an elevation of 4,130 meters above the sea level under the shadow of Annapurna I.

Annapurna mountain is also considered as one of the deadly mountains of Nepal. During this trek you can witness this deadly mountain. Besides that you will also get to see Machhapuchhre, Hiuchuli, Gangapurna and many other mountains throughout the trek. Because of those gignatic peaks nearby you should always be prepare for the worst. Necessary equipments should be packed well while trekking in Nepal.

There are limited hotels and lodges available at the top of the base camp. You will spend your overnight at the base camp under the shadows of the Annapurna. Do check the stars in the night, you will surely be amazed.

Situated at an elevation of 2,030 meters above sea level, Chhomrong is probably the biggest village you will pass by during your Annapurna Base Camp Trek. Besides that, Most of the lodges in the Annapurna Sanctuary are owned by locals from Chhomrong. Because of that Chhomrong is an ideal place to get information about the condition of trails, avalanche danger as well as the weather. Similarly, there are many shops in Chhomrong and you can get some of your personal items such as sunscreen, glasses, gloves and many more.

Ghandruk is one of the most popular gurung villages of Nepal. Situated at an elevation of 2,012 meters above sea level, marvellous views of the mountain ranges can be seen. Some of the most popular mountains that can be seen from Ghandruk village include the Annapurna, Machhapuchhre and the Hiuchuli. Most of the peoples living in this village are gurung and you experience the authentic gurung culture and traditions. Ghandruk village is also known by the name Konda in the regional language.

Annapurna Base Camp 7 days trek can be done during the Autumn and Spring season of the year. The months of September, October and November are regarded as the best time for Annapurna base camp trek. During these months of the year the weather is clear and marvellous views of the mountain ranges can be seen during the clear day.

The second best months of the year to visit Annapurna base camp trek is during the months of March, April and May. You can witness the beautiful rhododendron flower blooming throughout the jungle in the lower parts of the trek. The chances of rainfall is very low during this month of the year.

Travel Insurance is one of the most important things you must do before any travel or the trek. Most of the trekkers ignore this important part of the trek and face many difficulties. Travel insurance ensures that the travel is fruitful and safe. Travel insurance, not only acts as a safety net against the risk of incurring unforeseen medical expenses but also safeguards against other travel related emergencies that could spoil your trip.

At 08:00 AM: After your breakfast, your trekking guide will pick you from your hotel. After that, you will move towards Kalanki to join the Prithivi Highway. Prithivi Highway is the only highway that joins Kathmandu with Pokhara. The distance from Kathmandu to Pokhara is about 200 kilometres and takes about 6-7 hours to reach.

Drive to Ghandruk, Trek to Chhomrong

At 08:00 AM: After having breakfast, you will move towards Nayapul to join the way to Ghandruk. After Nayapul you will drive for about 2 hours to reach Ghandruk village. Marvellous views of the Annapurna, Machhapuchhre and Hiuchuli can be seen from Ghandruk. Upon reaching Ghandruk, you will walk downhill to finally reach a river. After that, you will have to walk steep uphill until you reach Chhomrong for the overnight stay.

At 08:00 AM: Chhomrong is one of the biggest villages that lie on the Annapurna base camp trail. Wake up early to explore this village. After breakfast, you will again walk downhill to reach the Suspension bridge. After that, you will have to walk uphill. After about an hour of walking, you will reach Sinuwa. About two hours of walk from Sinuwa will take you to Bamboo village for your lunch. Walking through the lush forest slowly you will pass Dovan and finally reach Himalaya for an overnight stay.

At 08:00 AM: After breakfast, you will slowly walk uphill to reach Deaurali village. There are only two hotels and Deaurali after Deurali the number of trees decreases. Because of that, the level of oxygen decreases. About 2 hours of walk from Deurali will take you to Machhapuchhre Base Camp for Lunch. Marvellous views of the Machhapuchhre can be seen from the lodges. You will reach Annapurna base camp before the sunset. Jaw-dropping sunset views over the Annapurna ranges can be seen during this day.

At 06:00 AM: wake up early to witness the marvellous sunrise view over the Annapurna, Machhapuchhre and Hiuchuli. After breakfast, you will walk downhill towards the Machhapuchhre base camp. Slowly decreasing altitude you will reach Sinuwa for the overnight stay.

Trek to Ghandruk, Drive to Pokhara

At 08:00 AM: After breakfast, you will walk through the same trail to reach Ghandruk. Upon reaching Ghandruk, you will take a ride back to Pokhara. You will have free time and can also explore this beautiful city of Lakes.

At 06:00 AM: Wake up early if you don’t want to miss the early sunrise view from the top of Sarangkot Hill. After breakfast, you will drive back to Kathmandu through Prithivi Highway. Upon reaching Kathmandu you will transfer to a hotel and you will have free time. In the evening we will have a farewell Nepali dinner together.

7 days Annapurna base camp trek is suitable for everyone, specially to those who doesn't have enough time to trek longer trails. 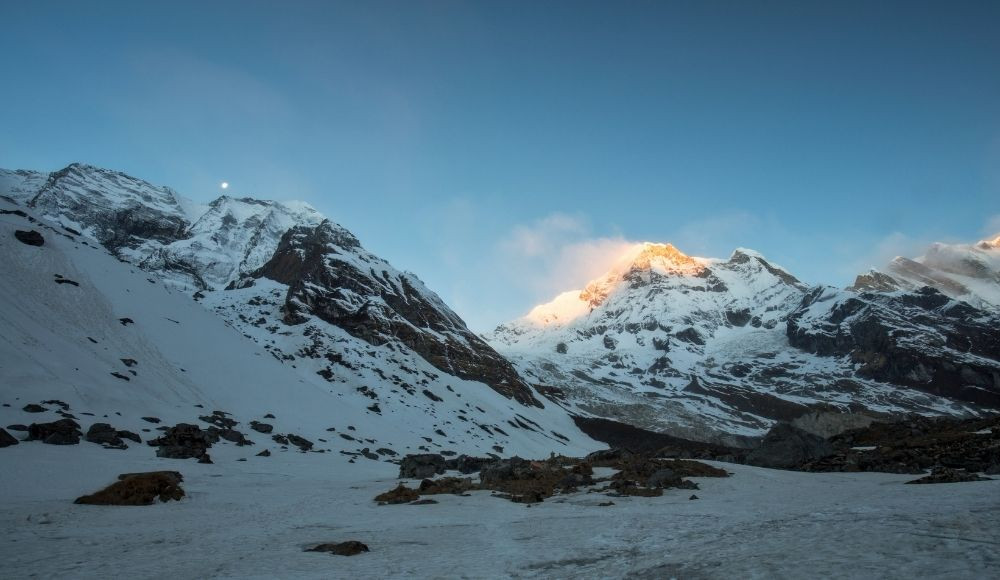 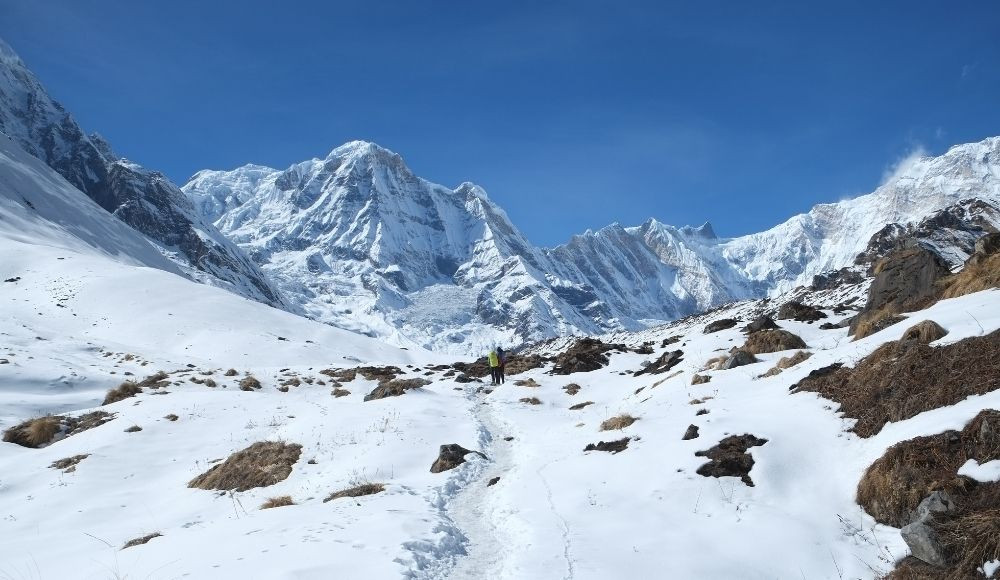 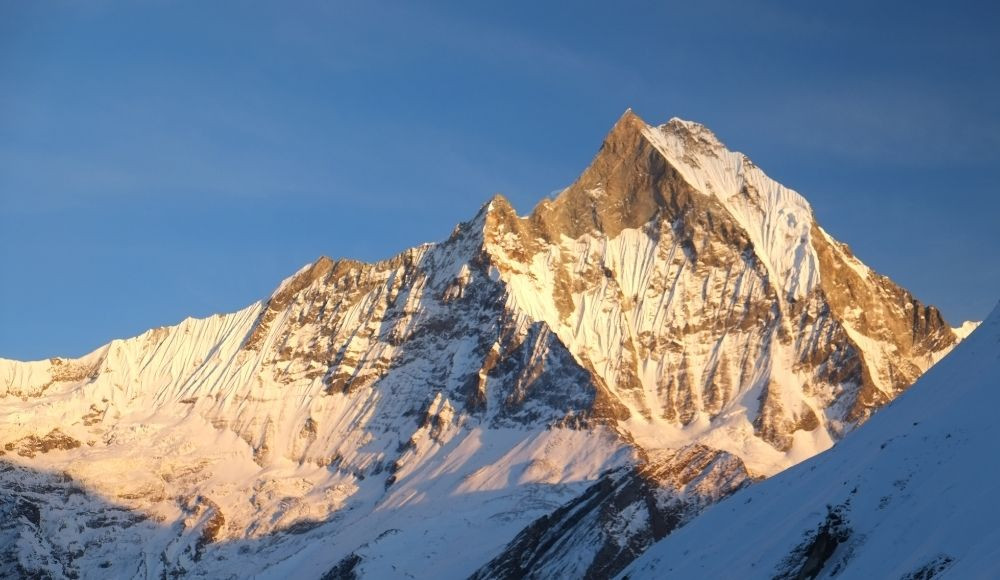