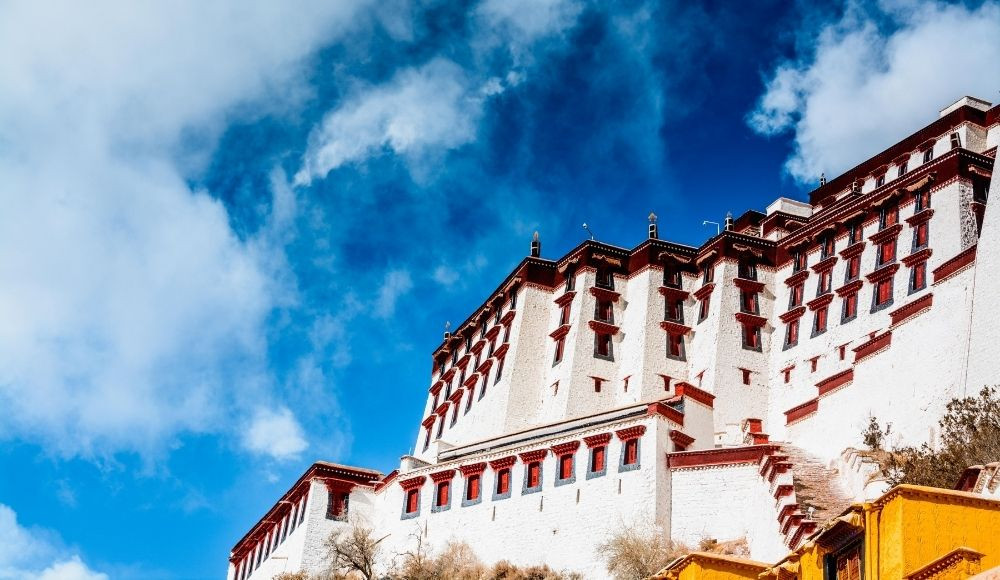 The third day, you explore the monasteries in Lhasa, Drepung and Sera. Both of these monasteries hold somYour Lhasa monasteries tour starts with arrival in Lhasa. Our representative will meet and greet you at Lhasa airport and transfer to the hotel. On day two, you visit for a city sightseeing in Lhasa, which covers Potala Palace and Barkhor street. Besides that you will also roam around the popular Barkhor street of Lhasa. It is one of the most sacred streets of Lhasa and you can only walk clockwise around the street that encircles the Jokhang Temple.

e of the most significant history and culture of Tibet. Both of these monasteries lie in the Lhasa city of Tibet. Similarly, both of them are also among the three great temples of Tibet. Further, The fourth day also continues with a monastery explore tour along with a visit to Ganden monastery. During your visit to Ganden, you will experience a Kora trek around there.

On the fifth day, we will farewell you from Lhasa to your home with some unforgettable memories in Tibet. Moreover, Visit Lhasa and explore the wonderful monasteries, distinct practices and learn about the lifestyle of inhabitants. Also, experience the diverse beauty of Tibet in the natural settlement.

Built by the 5th Dalai Lama Potala Palace is one of the major attractions of Lhasa. Situated at an elevation of 3,700 meters above sea level, it is 117 meters tall. Besides that it is the highest building of Tibet and no buildings are allowed to be built higher than Potala Palace. Covering an area of 130,000 square meters the total numbers of rooms inside this palace is 1,000.

Named after Mount Potalaka it used to be the winter palace of Dalai Lama from 1649 to 1959. After that it was turned into a museum and made public for the visitors. Meanwhile, it is also listed under UNESCO world heritage sites since 1994. Similarly, The bodies of the Dalai Lama 5th to 13th are preserved in this palace. Because of that also this place is one of the most important sites of Tibet.

Built in the 7th century, it took 3 years to complete the temple. During your visit you can witness different architectural styles such as Han style, Tiberian style, Nepalese style and Indian style inside the Temple. Meanwhile, it is also the spiritual center of Tibet and the holiest place of destination for Tibetan Buddhist pilgrims.

The name Jokhang Temple was given to this site after the 15th century only, before that it was called by the name Resa. The meaning of Re is the ‘Goats’ and Sa means ‘Earth.’The name was given to show the graduation to the goats who carried all the materials used to build the temple. You can only walk clockwise from left to right and taking photos inside the temple is not allowed.

Situated 8 kilometers away from the downtown, Drepung Monastery is one of the three greatest temples of Tibet. The opening hours of the temple is from 09:00 to 17:00 and you will need to pay RMB 50. With an area of 250,000 square kilometers it is the largest temple of Tibet as well as around the globe.

Founded by Jamyang Chojey in 1416, it is the most important temple of the Gelug Sect of Buddhism. The actual Dtepung monastery was small because the fifth Dalai Lama later extended this temple.

One of the greatest seats of learning in the Mahayana Buddhist Tradition, Sera Monastery lies in the Lhasa city of Tibet. Similarly, it is also one of the three great temples of Tibet. It was built by Jamchen Choje in 1419. Situated about 5 kilometers north of Jokhang Temple, it lies at an elevation of 4,000 meters above sea level. The hill behind the monastery was filled with wild rose which is called by the name Sera in Tibetian. Because of that it got the name Sera.

Ganden Monastery is the first and primary monastery of Gelug school of Tibetan Buddhism. Besides that it is also one of the three great monasteries of Tibet along with the Sera Monastery and Drepung Monastery. Situated at the top of Wangbur mountain, it lies at an elevation of 3,800 meters above sea level. It was built by Je Tsongkhapa in 1409. The full name of Ganden Monastery is Ganden Namgyal Ling. The meaning of Ganden is “Joyful” whereas the meaning of Namgyal Linga is “Victorious Temple”.

After arriving in Lhasa, a local tour guide will welcome you at the airport/train station, then transfer the guests to the hotel. Acclimatize the high altitude in the hotel.

Potala Palace and the Jokhang Temple are two of the most significant sites that you will be exploring on your second day at Lhasa. Minimum 2 hours is required to explore each of these sites. Because of that you may not get more time to explore other sites of Lhasa during the day.

The tour will begin from UNESCO World Heritage site – Potala Palace, which is also the winter palace of the Dalai Lama. It’s situated at 12,139 feet above sea level. It is a 13-story high building that contains over 1,000 rooms, various statues, stupas, murals and artefacts.

Then continue to Jokhang Temple, another UNESCO World Heritage site. It’s a spiritual centre for Buddhists in Tibet. Next, to the temple, there is Bakhor Street, filled with pilgrims and street vendors, selling traditional Tibetan items such as prayer wheels and jewellery.

Drepung and Sera are two of the most important monasteries of Lhasa as well as Tibet. Both of these monasteries are in the capital. Drepung Monastery lies about 8 kilometres from downtown. Meanwhile, Sera Monastery is located about 5 kilometres north of Jokhang Temple.

In the morning, tourists are going to visit Drepung monastery. It is one of the “three greet” Gelug monasteries of Tibet and was founded in 1416. Ganden palace is used as the Dalai Lama’s palace in Drepung before moving to the Potala palace.

In the afternoon, you visit Sera Monastery. It is also one of the “three great” Gelug monasteries of Tibet and was founded in 1419. The highlight is the Monks debate at around 3 – 5 in the afternoon.

Today you will drive to the Ganden Monastery. It is one of the “Great Three” Gelug monasteries of Tibet. The main sight is Serdang, which contains the tomb of Tsongkhapa. It is very interesting to trek Lingkor (circle around the monastery).  You can also see the Great Tsongkhapa’s meditation cave containing many religious statues, and enjoy the beautiful view of Lhasa valley.

We will transfer you to the airport or train station for your onward journey.

Find all details about Lhasa monasteries tour or let us text any required further assistance.