At that time Kalinchowk is filled with devotees as well as domestic tourists, where we can find them rejoicing in snow and capturing memories. 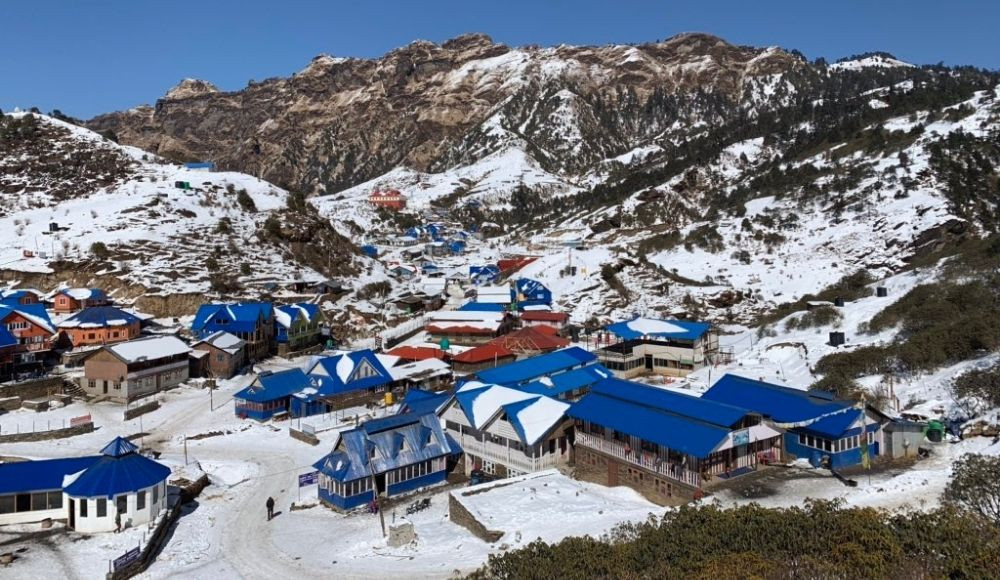 Among all the snowfall places nearby Kathmandu valley Kalinchowk is regarded as one of the best places to visit not only by its heart-melting scenarios but by the means of accessibility as well as safety too. It lies in the Dolakha district about 150 km north-east of Kathmandu and it is also part of Gaurishankar Conservation Area. Temple of goddess Kalinchowk Bhagwati ( An incarnation of goddess Durga) lies at the top of the hill that's why a huge number of Hindu and Buddhist devotees visit Kalinchowk throughout the year.

It is 3842 meters above sea level and if you are lucky you can have a splendid view of Langtang Himal, Dorje Lakpa, Ganesh Himal, Jugal Himal, Gauri Shankar and many more during the day of clear sky. As of recent Kalinchowk is famous for snowfall and we can find a huge amount of domestic tourists visiting Kalinchowk at the time of snowfall mainly from December to February.

During the time of snowfall, people visit Kalinchowk mainly to enjoy the snow. At that time Kalinchowk is filled with devotees as well as domestic tourists, where we can find them rejoicing in snow and capturing memories.

Last week of December to the last week of February is regarded as the best time for snowfall in Kalinchowk. During the time of snowfall, all the hills near Kuri village are covered with snow. The trail to the top of the hill (Kalinchowk Bhagwati Temple) is also filled with snow.

You can have an outstanding hiking experience while passing through those rhododendron forests covered with snow. No other hiking experiences near Kathmandu valley come close to hiking to Kalinchowk from Kuri village during the time of snowfall.

After reaching the top you will fall in love with the gorgeous snow-capped mountains. When the cold wind blows it takes away all of your tiredness from the journey. The view of the Mountains and hills from Kalinchowk Bhagwati temple is really fascinating during the time of snowfall. Be sure to wear warm clothes during your visit to Kalinchowk.

Nepal has six seasons, among them, December and January are the proper winter season of Nepal. But in the highland of Nepal, the winter season remains until the end of February. So from December to February, we can consider a winter season in Kalinchowk.

Travellers who want to visit Kalinchowk to experience snowfall can visit anytime during these three months. But one must ensure about the present weather condition as well as possibly the future forecast.

Kalinchowk Bhagwati temple is situated at the top of the hill about a 5 km uphill walk from Kuri village. A cable car facility is also available to reach the top of the hill if you are short on time. But it is best to walk as the trail to the top of the hill is filled with the rhododendron forest as well as you will pass through stone stupa-like commemorative structures which were built by the local people of Kuri village (mainly Sherpa, Tamang and brahmin) in memory of their ancestors.

It is also the origin place of two famous rivers of Nepal Sunkoshi and Tama Koshi. Before reaching the top we can see many bronze bells and Trishul deposited by the devotees. People also offer rice and sacrifice lambs and goats a few meters away from the summit of the same peak during Chaite Dashain and Dashain festival mostly.

How to reach Kalinchowk?

As it lies in the Dolakha district of Nepal you can get a public vehicle easily to Charikot which is also the district headquarter of Dolakha district. You will go through Araniko Highway to reach charikot. It will take about 5 hours to reach Charikot from kathmandu. After that you can get a 4WD jeep which will take you  via Maakebari route and it takes about 2 hours  to reach Kuri village from charokot.

You can find luxury hotels and lodges in Kuri village which is also the starting point to Kalinchowk. During the time of snowfall most of the hotels and lodges are pre-booked so that it is better to book in advance if you are planning to visit Kalinchowk during snowfall.

Typical Nepali food dal, Bhat, Tarkari & achar are found in all the hotels and lodges of Kuri village. Other food items, as well as beverages, are also prepared in hotels and lodges according to your need. Locally made chhurpi and Tongba are famous so try not to miss those two things during your stay.

Cable car at Kalinchowk was started in 2018. It is the 3rd running cable car of Nepal after Manakamana and  Chandragiri and is the shortest among all three of the cable cars. Cable cars operated in Kalinchowk are small in comparison to the other two and only 10 people can travel at a time or about 800kg weight. Its horizontal length is 900 meters as well as its inclined length is 950 meters. It takes about 5-7 minutes to reach the top or to return back to Kuri village.

The cable car is operated from 7 am to 4 pm in the winter season (mainly from last week of November to the first week of February) whereas it is operated from 6 am to 5 pm during other months of the year. Nepali rupees 500 is charged to Nepali whereas Nrs 1000 is charged to foreigners. 25% discount is provided to Disable, Student and Elderly whereas free for children below 3 years old.